This week, I completed the final edits in book 8 of the Virtues and Valor series titled Valor’s Vigil. It follows the story of Leopold Schaffer, and American spy wearing a Nazi officer’s uniform. Here is a snippet from Chapter 6 (you can preorder this novella, releasing November 8th, at this link): 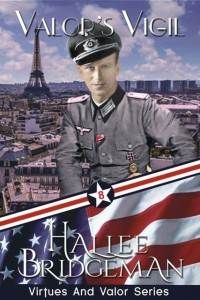 “Have you seen your mother lately?” Karl Schäfer asked as he poured tea. The dishes from the shared late lunch still covered the table in the suite of his hotel room. He would have them removed after their meeting. Instead of a military uniform, he wore a tailored suit and a white starched shirt.

“It’s been a few months.” Leo stretched his booted feet out and rested his head against the back of the settee. It felt good to speak English so freely. “Once I got the promotion, we felt the risk was too great. Now I get coded communiqués from time to time.”

Karl sighed as he picked up his cup and settled back in the chair. “I miss her.”

Leo smiled. “I know she misses you, too.”

His father lifted his tea cup. “I can’t imagine how she’s handling her tea without sugar.”

Thinking of the sweet leaves his mother had started putting in her tea, a gift from the Texan pilot, he smiled. “She has resources.”

With a bark of a laugh, Karl replied, “I have no doubt!” His face sobered. “I’m quite ready for this war to be over and for our lives to be given back to us, to return to normal.”

“Given back?” Leo straightened and met his father’s gaze. “Your entire marriage has been fighting a war, preparing for the next one, and fighting that one. We don’t have lives. We have missions. There is no normal for us Schäfers.”

A smirk crossed Karl’s lips. “Perhaps I’m ready for what normal could be.”

On a sigh Leo said, “Me, too.” Would there ever be a normal life for him? Did he have a wife in his future? Children? A job that didn’t require a uniform or deadly weapons? He rubbed his tired eyes. “What can I do for you, Father?”