Greater Than Rubies is Finished!

A Teaser From Greater Than Rubies 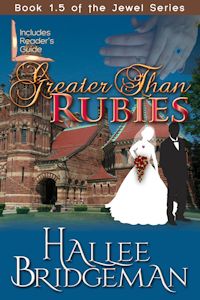 Greater Than Rubies will publish sometime this week or the early part of next week (and will be FREE!!).  In the meantime, here is a teaser:

She read through all of the questions twice. The way that Don Roberts had combined answers from their initial and second interview into a cohesive article revealed every fact she had shared, but also put Robin Bartlett and Tony Viscolli in the best possible light.

When she turned the final page, she found a handwritten sticky note Don had left for her. In really minuscule print, he had written,”Robin, I realize Tony is a billionaire, not a millionaire, but it didn’t have the same alliterative ring to it for the headline. You should know that I’m also a believer. I admire what the two of you are doing. The truth is you gave me a lot to think about, a lot to admire, and a lot to pray about. I wanted you to know that I am going to stop hiding my light under a bushel so much and let it shine a little more often. I pray I did you justice with this piece. Thanks for witnessing to me. Yours in Christ, DR.”

The woman this Inside Boston article portrayed, from the photographs to the out of context quotations, was not the woman holding and reading the magazine. The woman within these pages was confident, competent, and capable. Magazine article Robin was accomplished, witty, polished, and professional. That Robin would certainly make a fine match for Tony Viscolli. She would love him and support him and make him happy throughout his lifetime.

By contrast, the very real Robin Bartlett had brought nothing but conflict, heartache, and shame to Tony Viscolli since the very day he had first laid eyes on her. Everything about her spelled trouble from her heritage, her violent past, her lack of education, to her ignorance of the day to day politics of the high society world in which he lived. She wondered how Don Roberts would handle the fact that the woman who had witnessed to him so profoundly was less than two weeks away from leaving Tony Viscolli at the altar.