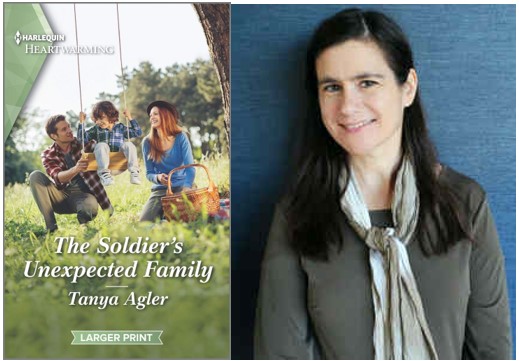 Interview with Tanya Agler and a Giveaway!

Welcome to Readers Write to Know! I asked you, my readers, what questions they would ask their favorite authors if given the chance, and the authors visiting my blog answered them! This week, I’m happy to have Tanya Agler as my guest. I, too, am a fan of classic movies and Jimmy Stewart is one of my favorites, so we already know that Tanya has amazing taste! Plus, she loves coffee, so I feel very comfortable claiming her. Read on to see how you can win two books and a coffee cup!

Tell us a little bit about yourself. Thank you so much for having me here today!

I’m a write-at-home mom of four, and my husband and I recently welcomed a beagle-mix rescue, Linus, to our family. I love tea, chocolate, and classic movies, especially ones with Cary Grant or Jimmy Stewart. My family lives in a suburb of Atlanta, Georgia, and I especially love the scenic paths around the area, especially the ones that lead to some of Georgia’s beautiful waterfalls including Amicalola Falls and Cloudland Canyon.

When my two oldest children were in school, I told my husband I was writing a book at the library, and he wondered why it took me so long to start writing! He knew I was a writer before I did. Then we found out we were expecting twins. When Cupcake and Chunk started Mother’s Morning Out at our church preschool, I started going to Panera every morning to write and found some great writing groups, which helped me learn about the craft and connected me with other writers. Now I have three books published with Harlequin Heartwarming, and my fourth, The Single Dad’s Holiday Match, is coming in October of 2021.

Tell us about your current release. Here’s the back cover blurb for The Soldier’s Unexpected Family:

He had a plan…
She changed it all! Major Aidan Murphy arrives in the charming small town of Hollydale to take full guardianship of his six-year-old nephew. Only there’s a slight problem–his vivacious, fiery co-guardian. School teacher Natalie Harrison has no intention of letting Aidan take her best friend’s heartbroken little boy away. Now Aidan must convince Natalie that blood is stronger than love…even if his heart tells him otherwise.

What I love about this book is where and how Aidan finds support where he least expects it after his younger sister dies while he’s serving his country overseas. Dealing with grief is part of his journey and he happens to collide with a heroine who tends to throw plans out the window. This is a book where opposites attract. And there are light-hearted aspects interspersed through the book with a pair of pie rivals and more. Picnics, parade floats, and pie, oh my!

With all those characters in your head screaming to get out how do you write fast enough to get it all down? That’s a great question, and there are a few days every so often where the characters really talk to me and the scene is crystal clear in my head and the distractions in the background are few. Those are the wonderful days when the words flow and when I’m editing, those scenes seem to have written themselves!

But for me, while I do have some of those days, I often start a book with an intensive plotting process. I ask characters about their motivations, think about where the book needs to start, and then asking why a lot. And then a few times more. That’s when they’re really screaming at me to go down one path or another, and that’s when I write everything down with a pen and paper until I know the characters and know the story. For me, those plotting stages are where the foundations of the scenes come in, and then I try to make sure during my first draft I plan for lots of stretches of walking the dog as that’s another way I keep living those scenes in my head. Usually the scene then is fresh in my mind when I sit down and put my hands to the keyboard. Sometimes, however, I have too much in my head and it’s not until I find a sentence of where to start that the scene starts flowing. And I still have to listen to the characters as I write. In my debut novel, The Sheriff’s Second Chance, Beau and Mr. Reedy weren’t in the original plotting process. The great big lovable goofball dog, Beau, came to me that first day of writing, and he’s one of my favorite animal characters that I’ve ever written.

What’s the first major news headline that you can remember and what do you remember? I remember living in Casselberry, Florida, when the breaking news reported Ronald Reagan had been shot. At the time, there were three major news stations, and there was one family television in the living room. My father was attending the University of Central Florida and my mother worked in Orlando, and I watched the news by myself. Following that, for the next few days, teachers and other adults would bring up the news and talk about where they were when Kennedy was killed. At the time, the country didn’t know the severity of the attempt on the president’s life and how close of a call it was although they did discuss James Brady’s injuries and the others, but I seemed to remember most of the attention focused on the hospital and well wishes and prayers for President and First Lady Reagan. I remember watching the news that week until President Reagan waved when leaving the hospital.

Who was your first Screen/Musical Crush? Christopher Reeve (after Benji the dog, that is!). I loved Superman 2! I remember that was one of the first movies I saw in a theater. When Clark Kent put his hand in the fire to retrieve his glasses, I think that sealed my crush on him. And I’m one of the fans who loves Superman 3 simply because he gets to play good Superman/bad Superman. Now, his and his wife Dana’s story are an inspiration, and their books (Still Me, Care Packages: Letters to Christopher Reeve from Strangers and Other Friends, and Love Letters of a Lifetime) are on my keeper shelf.

How did you make the initial step into writing your first novel? What were some of your major roadblocks and how did you overcome them? Thanks for the thought-provoking question. Have you ever seen the movie Back to the Future? I’m a little like George McFly in that I’d been thinking about stories for years and was always afraid of what if people didn’t like them or want to read them or what if they weren’t good stories. So to say I was my own major roadblock is the truth. And I finally reached the point where I knew God wanted me to take a step of faith. I started going to the library and I sat down and wrote that first novel, which is under the bed because I really was writing at that point to prove I could actually finish a book. After my twins were born and when they entered Mother’s Morning Out at our church, that was when I took more substantive steps. I started writing on a regular basis, found writing groups, started reading books on the craft of writing, and reached out to others for critiques. Time, a willingness to learn, meeting other writers, prayer, and support from others helped me overcome some of those roadblocks. I’m still a work in progress!

What is your preferred method of writing? It depends on what stage of the manuscript I’m working on at that time. If I’m plotting, I use pen and paper because that’s the best way for me to start exploring all the questions, the “whys,” and the road maps. I also get a little too much satisfaction from rumpling up the paper if there’s something that really goes off track! For the most part, however, I use a lot of paper by the time I’m plotting chapters. My first draft is on computer. That’s when I sit down and I write chronologically, but there are writers who write the ending first. In first draft mode, I’m constantly thinking about the next scene: when I’m walking the dog, folding laundry, and so on. I do a bit of editing as I go along as well. Then with edits, I read it on an e-reader for the first run through and make notes on paper before incorporating those into a document saved as Working Title – Second Draft – Month Year. And then I go through my editing process. So it’s mostly computer for the actual writing, but pen and paper for plotting.

Who were some of your favorite authors as a child? I’m such a big fan of Trixie Belden! This was definitely the book series where I can see why I love series so much. When I was in second grade, I discovered Trixie Belden books, and I devoured them. I couldn’t wait to read the next adventure with Trixie and Honey. To this day, I have many of the original books from my childhood collection. This was my favorite, and I read and re-read the books.

And then in seventh grade, I met Anne Shirley when I read Anne of Green Gables by L.M. Montgomery. My school library only owned that one and Anne’s House of Dreams so I was thrilled when I later found out there were other books in that series as well. To this day, I always look for kindred spirits!

Here is where you can find Tanya online:

I love following Hallee’s blog and she loves coffee, so I’m giving away a coffee mug and copies of my first two books, The Sheriff’s Second Chance and A Ranger for the Twins to a reader! (US only) See below how to enter to win: