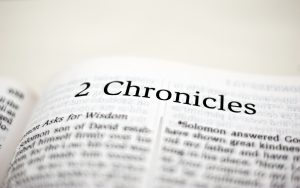 Many days a week, I do a 4-mile aerobic walk. It takes me one hour. I listen to my Word of Promise Bible while I walk. Today, among other chapters, I listened to 2 Chronicles chapter 9.

As I was listening, I thought about all of the questionnaires that have gone around since the invention of the internet. Often, in the series of questions, there will inevitably be, “What event would you wish you could witness?”

Listening to this chapter, all I could think is how amazing Jerusalem must have been in the prime of Solomon’s rule! Think of the ornateness of these descriptions — think of the exoticness of the environment. Think of the rule of a man who is described in 1 Kings 4:  And God gave Solomon wisdom and exceedingly great understanding, and largeness of heart like the sand on the seashore.

I would love to travel back in time and stand in Solomon’s courts – to witness this grandeur that was built as a way to glorify God.

Moreover the king made a great throne of ivory, and overlaid it with pure gold. The throne had six steps, with a footstool of gold, which were fastened to the throne; there were armrests on either side of the place of the seat, and two lions stood beside the armrests. Twelve lions stood there, one on each side of the six steps; nothing like this had been made for any other kingdom.

All King Solomon’s drinking vessels were gold, and all the vessels of the House of the Forest of Lebanon were pure gold. Not one was silver, for this was accounted as nothing in the days of Solomon. For the king’s ships went to Tarshish with the servants of Hiram. Once every three years the merchant ships came, bringing gold, silver, ivory, apes, and monkeys.

Solomon had four thousand stalls for horses and chariots, and twelve thousand horsemen whom he stationed in the chariot cities and with the king at Jerusalem.

So he reigned over all the kings from the River to the land of the Philistines, as far as the border of Egypt. The king made silver as common in Jerusalem as stones, and he made cedar trees as abundant as the sycamores which are in the lowland. And they brought horses to Solomon from Egypt and from all lands.