The Walking Bread; The Bread Will Rise! Is Now Available!

Oftentimes, people ask me,  “If you could pick an actor/actress to play [name character], who would it be?”

It’s not always easy to come up with someone, because in a writer’s mind, much like a reader’s mind, there is a very clear picture of who the character is.  It’s not, for me as a writer, anyway, like I see an actor and write a book around him.  So, it’s possible that you couldn’t find an actor who perfectly fit your character. 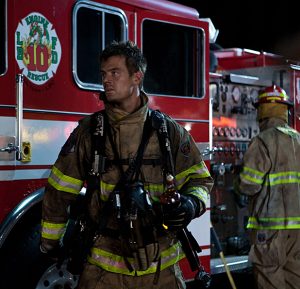 That said, the other night, my husband and I watched Safe Haven.  I didn’t recognize the lead guy (Josh Duhamel), so when I saw him, I was kind of surprised.  He looks EXACTLY like my character in Burn (an unpublished novel), Ian MacDermott.  EXACTLY.  The entire movie, I couldn’t get over how much he talked like him, moved like him, looked like him — it was almost eerie.

AND, Gregg reminded me that we’d seen him once before – in a movie about a fireman!  I wrote the book about 15 years ago, so this is purely coincidental.

Unfortunately, unless I find a way to write a ghost, who is a main character and an integral part of the plot, out of Burn, it won’t ever be published.  So, chances are good you won’t ever meet Ian MacDermott, my Irish fireman in Chicago, who saves Anna Piedmont in more ways than one.  But, at least now you’ll know what he’s supposed to look like.

Disclaimer: Yes, I know I’ve stated we don’t watch anything that has premarital and/or extramarital sex in it.  Unfortunately, the movie Safe Haven did not follow the book Safe Haven, and we were disappointed in the Hollywoodishness of needing sex to portray a true and deep love.  As beautifully built as the love story was, that scene ruined it for us and I don’t recommend the movie.  Read the book.  Which I have not, but my daughter Kaylee has assured me that the couple do not have premarital sex in the book.