Interview with Author James R. Callan — With a Giveaway! 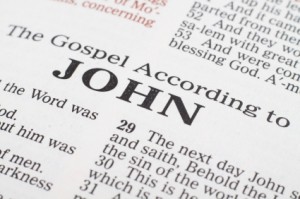 I’ve been bombarded with a lack of time lately, and sitting down to write this blog post, as simple as it may seem to my mind while I’m out walking, has just not been happening. So, I’ve finished the book of Luke, and the book of John, and have made it to the first two chapters of Acts.

I do have something to say about the Book of John, though. If you haven’t seen The Gospel of John, then you’re really missing out. This production is really quite amazing. The man who played Jesus is, by training, a Shakespearean actor. This was intentional because they wanted someone who would preserve the verbatim text and not differentiate from the lines at all. It’s a verbatim production of the entire book of John. Brilliantly done. It’s wonderful to see, in a good production that doesn’t try to present “gentle Jesus meek and mild”.

If you told me I could only keep one single book from the entire Bible, I would be torn between the gospel according to John, and the book of Acts. Honestly, I think John is my favorite book.

I could spend 365 days this year telling you all of the things that stand out to me on that book. But, today I’ll just pick one, and go onto Acts tomorrow from there.

So when Jesus came, He found that he had already been in the tomb four days. Now Bethany was near Jerusalem, about two miles away. And many of the Jews had joined the women around Martha and Mary, to comfort them concerning their brother.

Now Martha, as soon as she heard that Jesus was coming, went and met Him, but Mary was sitting in the house. Now Martha said to Jesus, “Lord, if You had been here, my brother would not have died. But even now I know that whatever You ask of God, God will give You.”

Jesus said to her, “Your brother will rise again.”

Martha said to Him, “I know that he will rise again in the resurrection at the last day.”

Jesus said to her, “I am the resurrection and the life. He who believes in Me, though he may die, he shall live. And whoever lives and believes in Me shall never die. Do you believe this?”

She said to Him, “Yes, Lord, I believe that You are the Christ, the Son of God, who is to come into the world.”

I think that Martha gets a bum rap from Christian women due to the whole “Mary and Martha” thing, when Martha was complaining to Christ that she was doing all the work while Mary was just sitting at Jesus’ feet, worshiping Him. Jesus never condemned Martha for working, nor did He condemn her for NOT joining her sister. After all, the work had to be done, the meal had to be prepared.

I’ve never been a fan of the embracing Mary revolution. I would be Martha. I would be preparing the meal and getting annoyed at my sister for not helping me. I would not be able to sit around while people were hungry if I had chores to do. I’ve always fallen back on the fact that Jesus healed Peter’s mother-in-law and she got up and served them a meal!

So, I love this section of scripture. Because, to me it shows that Martha truly loved and believed in Christ – and He knew it. He knew her heart — even if she WAS the one who didn’t sit at His feet and worship him while there was work to be done. Her faith was strong, and she knew who He was.