It’s hard sometimes, to know what to do and when to intervene. Scott is 11-1/2. Most 11-1/2-year-olds can fight their own battles, know how to stand up for themselves, or how to extract their way out of a situation.

Scott doesn’t. He shuts down. Emotionally, spiritually, physically shuts down. 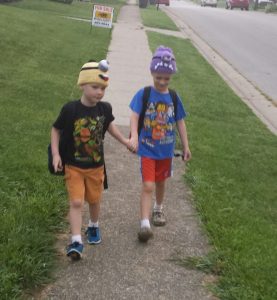 Most 11-1/2-year-old boys don’t need their little brothers to stand up for them. But, Scott does. His brother, Jeb, is 9 and his defender and protector.  He understands, even at 9, that sometimes he needs to be the one to step in and take charge of a situation that Scott is in. He also understands that as they get older, that will remain his responsibility. Because Scott has autism and the social nuances of life are a total mystery to him. It’s not something we’re going to be able to teach him. It’s something he’s going to have to navigate on his own — well, not on his own. With his brother by his side.

The other night, we were at a party at a friend’s house. There were about 15 kids present, including our own. They were all playing upstairs in the kids’ area. At some point later in the night, I could hear Jeb’s voice – very distraught – but I couldn’t hear his words.

I ran up the stairs and into the room and found Jeb in between two big (I mean, seriously big) preteens and Scott, telling them to leave Scott alone. Only, Jeb is small and these boys were big and they were just reaching around him, picking at Scott (I think poking him with a wooden knife) as if Jeb wasn’t even there.

Imagine the concept of “poking the bear”. I could totally see these kids doing this to a caged animal at the zoo with a stick.

Scott had his back to them. His hands were fisted and his eyes were closed and he was so tense that he was probably sore the next morning. I immediately ascertained the situation and firmly told the boys to stop.

They didn’t stop at first.

What kid doesn’t stop when an adult catches them in bad behavior? And, I’ll tell you something — I’m not nice. Or sweet. In this situation, I was downright mean. So, there’s no reason they didn’t stop. 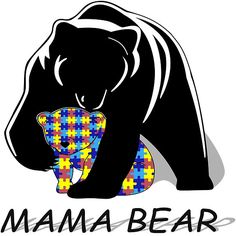 Back to the zoo scenario — mama bear suddenly took charge.

I stepped between them. I am not a small woman. So, I bowed up and stepped between them and told them to find somewhere else to be. The leader of the kids hesitated – I don’t know what he thought the outcome could possibly be that didn’t end with him in tears, but after I repeated myself, he eventually backed down and left the room.

I sent Jeb downstairs to start making sure that we were in a position to leave, to find our neighbor’s son who had come with us, and to get everything together he’d brought with him.

Scott was done. D-O-N-E. I touched him and he jerked away and whispered, “No.” I tried to talk to him and he just said, “No.” I asked him if I could do anything to help him, and all he could do was say, over and over again, “No.”

That was what pulled him out of the internalized meltdown that had him in a spiral. I took him downstairs and he waited on the stairs to the front door (the house was split level, so the front door was at the bottom of the stairs), sitting on a step in the middle, covering his ears with his hands and just waited, giving me a chance to find Gregg and Jeb and say our goodbyes.

I found the mom of the kid and told her what happened, but she was honestly unconcerned. I truly think she didn’t understand the level of wrong her kid had just perpetrated. Because, most 11-1/2-year-old can handle that situation and it won’t have a detrimental affect on the rest of their day or night or week or life. Unfortunately, that isn’t our situation. She didn’t even react when I told her how he didn’t listen to me at first. But, maybe the issue is that she was about 6 inches shorter than the oldest son and he’s obviously a bully. Anyway, at least I told her.

Jeb and I went outside to make sure his glasses were in our van and not lost inside  somewhere , and on our way back inside, I caught the biggest of the two kids sneaking down the stairs, holding the wooden knife thing , about to poke Scott from behind.

I rushed up the stairs, got in his face, and told him, “Find somewhere away from me. Right now.”

What did he think I’d do? Trust him to comply and continue about my business?

I went up another step and now I had to bend to stay face-to-face with him.  “I said, find another place to be. Now.”

He turned around and I didn’t see him the rest of the night.

WHAT IS WRONG WITH PEOPLE?

How was this something a kid would even think to do? 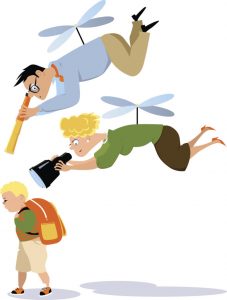 Helicopter-parenting isn’t going to make it easier for Scott. He has to learn how to navigate that, he has to learn coping skills.

Jeb has to know he can step up and get between Scott and two big kids and not be afraid of them – even when he’s not sure if we’re going to be there to help them.

But that doesn’t make it easier to experience. It doesn’t take the hurt away or the clenching of my heart when I think back to the image of Scott so tense and shut down, and Jeb so brave and ineffective.