Interview with Gail Kittleson and a Giveaway! 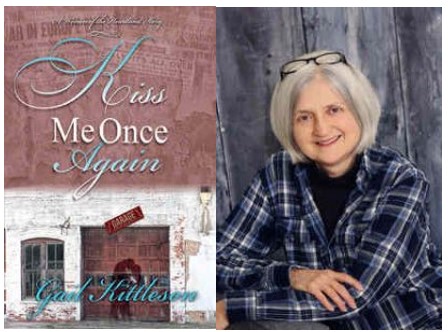 Interview with Gail Kittleson and a Giveaway!

Welcome to Readers Write to Know! I asked you, my readers, what questions they would ask their favorite authors if given the chance, and the authors visiting my blog answered them! This week, I am happy to have Gail Kittleson as my guest. Anyone who has known me for any length of time knows how much I LOVE WWII and the era of the late 30s to early 60s. I have always believed I was born into the wrong generation (though my husband and kids disagree! HEH) I love going to thrift stores and finding old books and magazines, looking at advertisements, pouring through pictures. And I always feel a kindred connection with other writers who love that era, too. Gail writes WWII books, so she’s one of those kindred spirits with me! I hope you enjoy her interview. Read on to see how you can enter to win a copy of her latest release!

Tell us a little about yourself: When Gail’s not steeped in World War II historical research, writing, or editing, you’ll find her reading for fun, gardening, or enjoying her grandchildren in Northern Iowa. She delights in interacting with readers who fall in love with her characters.

Women of the Heartland, Gail’s World War II series, highlights women of The Greatest Generation: In Times Like These, April 2016, With Each New Dawn, February, 2017 (Lighthouse Publishing of the Carolinas, and Word Crafts Press, December, 2017.)

These heroines make do with what life hands them and face great odds with integrity. No easy outs or pat answers for their struggles – it’s the thick of World war II. The same can be said of Dottie in In This Together, Gail’s first historical novel (Wild Rose Press/Vintage Line), and of the women in her memoir, Catching Up With Daylight (WhiteFire Publishing.)

Glenora Keeps Her Heart Under Lock and Key

No one ever accused Glenora Carson of being a breathtaking beauty. Her tall, gangly figure and angular face are more solid midwestern stock than Hollywood glamour. But Joe liked her. He even told her, “You’re the one for me.” He gave her a locket with his picture inside, to remind her of him while he was away, serving his country on the U.S.S. Arizona.

After December 7, 1941, Glenora shelves her dreams of attending college on the scholarship she was offered by Iowa State University, locks her heart away, and focuses on holding down the home front by helping out the family business – Carson’s Garage. The grease-stained overalls didn’t do much to compliment her female figure, but they cover her female heart well enough.

That is, until Hank Anderson, a wounded warrior back from battle, walks into the garage and into Glenora’s life.

What inspired you to write? (and )Have you always wanted to write a book? I always wanted to be a writer, although I didn’t really think I’d be writing fiction some day. At first, I only wrote poetry. Then when I taught college expository writing, I realized how much I liked writing essays. Fiction writing was one of those pleasant surprises in store for me. I recall walking out in my aunt’s pasture as a teen and having a spiritual experience that motivated me to write, but it took a long time to develop the courage.

How did you make the initial step into writing your first novel? What were some of your major roadblocks and how did you overcome them? I had led several groups through The Artist’s Way by Julia Cameron, a wonderful motivational workbook. Each chapter has work for the participant to do at the end, and I took part fully in that. After the final group ended, my first character came to me. I suppose my main roadblock was ignorance of fiction techniques, and it took some determination to learn how to put the story together. The other roadblock was hating to delete my precious words. (: But it’s so necessary, and I have become quite good at the editing process—actually enjoy it almost as much as writing.

Who do you envision your typical reader to be? She’s most likely a woman, and pretty serious minded if she’s into reading the nitty-gritty details of World War II. I hope my readers are younger and younger, but think they’re mostly in mid-life or older, with a strong interest in history.

I’m always intrigued by how writers get started. Did you always have these books inside you and knew that you wanted to write them or did the idea just pop into your head one day and you decided to put pen to paper? No, I didn’t have these characters in my mind at all. One day, the very first one appeared to me, and it was one of those golden moments. I had no idea how the process would go, that she would open up little by little and her story would develop. Once that first book was history, I knew the ropes—but before that, I really had no idea how it would work.

Do you write your books for your own enjoyment or more for what you think people would want to read? I write them to help readers grasp the incredible tenacity of the Greatest Generation. I think our society forgets what makes true heroes, and desire to reveal some of them to modern readers.  At the same time, I do love this era—I’m hopelessly addicted.

Which of your characters most reflects your personality? Probably, Addie, the heroine of In Times Like These. She had to overcome a shame-based worldview in order to believe she was worthy of kindness. For her, learning to embrace hope and joy proved a daunting process. Through it all, her faith grew and she realized how much she was loved, and once she got going, it was hard to stop her. That sounds a lot like moi.

I assume when you start a book, you pretty much have the plot laid out. Do you ever change your mind later on in the book, and go in a different direction? I don’t have a plot laid out when I begin writing. The character whispers her/his story in my ear and as I research the specific time slot, the story develops. For example, Glenora in Kiss Me Once Again has a kid brother deployed with the Navy. In order to pinpoint his ship and the calamities it encountered, a great deal of research was required. I didn’t plan for it to be hit by a typhoon, but that’s what happened to it in real life. Also, I never intended this book to have a strong romantic thread, but it had different ideas!

Here is where you can find Gail online:

Gail is giving away an ebook copy of Kiss Me Once Again to a reader! See below how you can enter to win: