Autism, Girls Can Be Mean, and Angry Birds

I am so excited to be part of another amazing collection! Introducing Smoke and Mirrors, eight romantic suspense novellas that all have a theme surrounding the idea of “hidden identity” and summertime!. My new novel, On the Ropes, will only be available in this collection until August, so don’t miss on your chance to read it now! For one month, the price is just 99 cents, then it will go up — so, get it while it’s hot!

Exclusively on Amazon. Order it now! 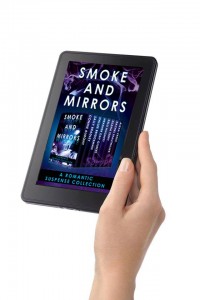 Read below to see how you can win a Kindle Fire!

THE LONG VIEW by Connie Almony: J.T. MacGregor is ex-FBI and training with terrorists. When his former boss makes an unusual request, J.T. wonders about his motives and how he can use them to his advantage. Destiny Long is no stranger to her father’s covert world of catching terrorists, but who is he after now? When J.T., the man behind the one kiss she will never forget joins a fitness club owned by a suspected member of ISIS and he’s found praying head-first into a tasseled rug, she wonders what side of the war on terror is J.T. MacGregor really on.

TAKEN by Sally Bradley: Cam Winters has never talked about his past, about life before he became a Christian. Jordan Foster knows that Cam’s a strong, caring man–a man she can see herself with. But he refuses to ask her out for fear of what her brother, one of his closest friends, might say. So Jordan takes things into her own hands. When Cam admits to sharing her feelings, the two fall quickly in love–just as that past that Cam won’t ever talk about returns for Cam and those he loves. A group which now includes Jordan.

ON THE ROPES by Hallee Bridgeman: Doctor Ruth Burnette is placed in witness protection after witnessing a Russian mafia execution. Just a week before the trial, Victor Kovalev finds her. Memories of planning her wedding with Victor are wiped clean by the vision of his father executing three men. Does he want to help her survive to her testimony, or is he trying to stop it all together?

OUT OF CIRCULATION by Heather Day Gilbert: When Russian mobsters threaten small-town librarian Katie McClure, she is forced to accept an offer of protection from Manhattan bodyguard Ace Calhoun. As they race the clock to find a long-hidden bank stash, Katie discovers too late that Ace might be the wrong man to trust with her life…and her heart.

DANGEROUS ALTERNATIVE by Kelli Hughett: Summer in Southern California doesn’t get any hotter than this. When Levi Boulter agrees to work for the FBI behind the scenes in Hollywood, he never plans on becoming an operative working to thwart a plan to assassinate the President’s wife—or on keeping a deadly secret from Mahari, the love of his life. When Mahari is kidnapped, Levi makes the gamble of his life in order to save her. Will Levi’s secret divide them forever, or will they come together in time to stop an assassination?

IDENTITY THEFT by Alana Terry: After losing her fiancé in a devastating accident, Lacy meets Kurtis, an Alaska state trooper, and his delightful four-year-old daughter who would love nothing more than to make Lacy her new mom. Things could be perfect, except Lacy can’t shake the nagging suspicion that her fiancé isn’t dead like the police reports claim. All she wants is closure, but as she seeks out real answers, she discovers how deadly the truth can actually be.

OBSESSION by Rachel Trautmiller: A surge in crime has left two homeless women dead and Detective Amanda Nettles’ Alzheimer’s-riddled mother as the prime suspect. As his wife embarks on a dangerous game of hide-and-seek with a remorseless serial killer, FBI Agent Baker Jackson Robinson knows he can’t sit idly while the city of Charlotte destroys Amanda’s career a second time. Is her near decade-long obsession with protecting her hometown bigger than the needs of her family? Or are they one and the same?

SCENT OF DANGER by Alexa Verde: To find her missing sister, small-town cop Maya Hutchinson risks her life by posing as her glamorous twin. Under escalating attacks, Maya accepts protection from dashing senator’s son Connor McNamara. Cop turned PI, Connor McNamara has his own secret mission and is forced to choose between family loyalty and love. When the scent of danger draws near, will Connor and Maya survive long enough to forgive and accept each other?

Order it now on Amazon!

Interested in winning a Kindle Fire? Just check back here on Wednesday, May 25th, for our Smoke & Mirrors Summer Destination Blog Hop! We’ll hop to blogs from all of our authors, then wrap it all up with a Facebook party. A Kindle Fire, and paperbacks from ALL of our authors will be up for grabs! Don’t miss it!