This is a busy time of year for me. It’s harvest season, and even though I didn’t put in a garden this year, I have friends who did and still find myself blessed with a bounty of produce that needs to be “put up”. For those of you who don’t do home preserving, what I mean by that is that it needs to be prepared in some way and then preserved in some way.

This weekend, in the midst of the weekly paperwork that I process for Olivia Kimbrell Press, I processed about two bushels of tomatoes (I’m sure there’s a stray tomato seed stuck on some invoice somewhere). I made a massive pot of spaghetti sauce (which has currently been cooking for three days and is now on the stove reducing and thickening up) and filled two crock pots with quartered tomatoes that stewed from Saturday night until Sunday evening. Monday morning, I canned the seven quarts of tomatoes that came out of the two crock pots. I should get at least seven quarts of spaghetti sauce.

As I washed the jars and prepared to can the tomatoes, I realized how blessed I am to be able to perform this process. Not only do I have running water (something my ancestor sisters who had to can tomatoes didn’t have, and something way too many people in today’s world don’t have), I have a big pressure canner, I have a big pot in which to cook the sauce, I have an immersion blender to blend the sauce, and I have not one but two crock pots in which to stew the tomatoes — saving me an entire day of cooking. 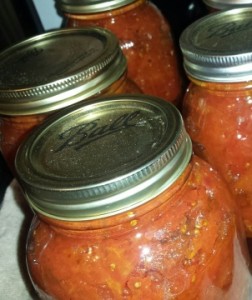 Thinking about my ancestor sisters who had to haul water by hand and mash tomatoes with something other than a high-speed rotary blade, I realized that I am truly blessed to be living where I live in the time period in which I live. Consequently, I was able to get seven quarts of tomatoes canned and still have five hours of writing time to spend on Valor’s Vigil, book 8 in the Virtues and Valor series.

Getting in the frame of mind for entering into 1942 Occupied France in the midst of canning makes me think of one of my prized possessions: The Ball Canning Book from 1948. I love it. My grandmother bought it the year my mother was born. A huge portion of my childhood memories revolve around my grandparents’ garden in Oregon and my mom and grandmother canning in the fall. Growing up, we always had a shelf full of home-canned items that we would bring home from my grandparents’ home.

So, now I’m getting back into Occupied France while I smell the spaghetti sauce reducing on the stove. We’ll know the influence if I end up bringing the Italians into my German fight. I’m also going to start thinking about a preserving cookbook.