On The Ropes: A Romantic Suspense Novella – Now Available for Preorder!

Today is our son Scott’s 10th birthday. On this website, I’ve often spoken of the challenges of parenting a child with autism, but I haven’t gone into a lot of details about his prematurity, probably because I had blogged about it so often at Hallee the Homemaker. But, as we close out his first decade, get him his first military I.D., put a double digit on his birthday cake, I can’t help but think back to those weeks 10 years ago that were spent in the NICU.

As I’ve been thinking about it, I couldn’t help but remember the blog post I wrote titled “Peace That Passes Understanding” that I wrote for his fourth birthday. I’ve pulled it out, dusted it off, and thought I’d share it with you.

Apparently, I don’t get symptoms of high blood pressure. I’ve had high blood pressure since Scott’s pregnancy, and still don’t get symptoms. No headache, no spots in front of my eyes (except when I shower), no nothing that would indicate a critical blood pressure. One Saturday night, when Gregg was packing to go to a military school, I started having contractions. I was just over 28-weeks pregnant and on full bed rest. I tried to ignore them, because he should have left that afternoon and by now it was 10PM and he still hadn’t left. I knew if I told him I was having contractions, he would take me to the hospital. I was trying to get him out the door then I would drive myself. However, they picked up intensity until I finally had to say something. Gregg, of course, quit packing and rushed me to the hospital.

The first thing they did was put a contraction monitor thingie on me, which showed the intense contractions every 2-3 minutes. They were so strong, I was panting through them. As the machine started recording, they took my information (I had not pre-registered yet, because, you know, I should have had around 12 weeks left before I needed to be there), chatted with me about how I was feeling, and then put the blood pressure cuff on my arm. The VERY SECOND she strapped on the cuff, my contractions completely went away and never returned.

I know that God knows that I would have ignored a headache or spots in front of my eyes because at that time in my life, I didn’t even know what that number right there meant. But already having had a child, I couldn’t ignore contractions, and He in His ultimate wisdom got me to the hospital.

Gregg could not stay. He had to be 350 miles away by 8AM. They admitted me.  He kissed me goodbye. I felt nothing but peace.

My good friend, and our pastor’s wife, stayed with me. She spent that entire Sunday, and every day after work (she was a bank manager) in my hospital room. We watched the Sci-Fi channel (you can’t beat uninterrupted Doctor Who or Firefly marathons) or the jewelry channel (I never even knew such a channel existed – she loved watching it) and chit chatted about the Dean Koontz novel she insisted I read. And through it all, I felt nothing but peace. 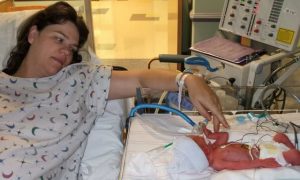 Ten days later, on a Monday afternoon, the doctor came into my room. He told me all of my blood and urine work looked good. He said that the insurance company was trying to get the hospital to send me home, and that he had collaborated with a colleague to get a second opinion, which would buy us a few more weeks. He didn’t feel like I could go home, because his instincts told him that once either the baby or I started failing, there would be very little time to react. His plan was to wait until that point, buying Scott as much time as possible in utero before he acted. He then said that he was going to go to the nurses station in order pull up the results from the ultrasound I’d had that morning and would see me tomorrow.

Not five minutes later, I heard the pounding of his footsteps as he ran back to my room. He was actually running.  He swung into my room and, out of breath, asked me how quickly Gregg could get there. When the doctor called him from my cell phone, the answer was, “Let’s see.” (We won’t discuss that it took less than 4 hours to drive the 350 miles.) 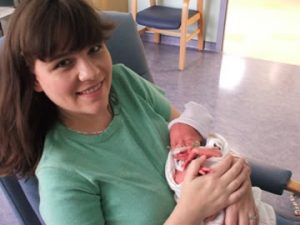 About that time, my blood pressure started to spike. Alarms were going off everywhere, my friend arrived for her evening vigil and was pulled aside and fed information, and my nurses came into my room with tears in their eyes. One nurse started patting my shoulder and tried to tell me everything would be okay, but burst into tears and had to leave the room.

I guess I was in pretty bad shape.

And yet, all I felt was total peace.

They couldn’t wait for Gregg, though the doctor waited as long as he could. I was scary sick, Scott was scary sick, and they said they’d lose one of us if they didn’t act now. I told them to do what they needed to do.

As they wheeled my bed from my room to Labor & Delivery, we passed a waiting room. I looked over and saw 15 of my friends and church family on their knees holding a prayer vigil for me.

I already felt at peace, but the sight of that flooded me with the most serene calm.

When Scott was born that night, he let out a loud cry. I told my friend, who sat at my head in my husband’s place, that it sounded like a healthy cry and tried to comfort her and convince her that everything was going to be fine. 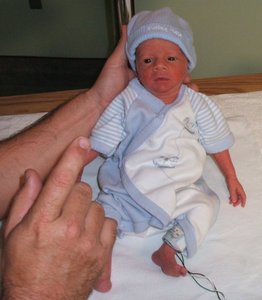 And everything was fine. Perfectly fine. Four weeks of NICU, Pedicatric ICU, doctors and specialists, therapists and nurses. Four weeks of living at the hospital, pumping my nourishing breast milk every 3 hours so they could feed him with a tube, holding my tiny 3-pound son around the wires and the tubes that any NICU parent knows about — and here we are ten years later and everything is perfectly fine.

This never surprises me. From the first day, the doctors and nurses were surprised every time he made a step forward. They warned us it would be “two steps forward, one step back” in the NICU. But Scott never stepped back. He had been home with us for 6 weeks on his due date, and didn’t even yet weigh 5 pounds.

God gave me the peace that passes understanding (Philippians 4:7). It was a beautiful gift that He gave me. I don’t know how much of my experience would have changed without it, but I have a feeling that the change would be drastic. 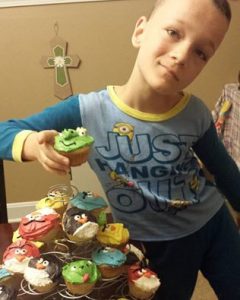 Today Scott celebrates his 10th birthday. There should be a dozen things wrong with him. He should have deafness, blindness, speech troubles, learning disabilities, asthma. He should not be this perfect, brilliant, healthy little boy who thrives. He sees with perfect eyes, he hears so well that he has to cover his ears when things are too loud, he breathes in air with perfect lungs, and his brain astounds me. I never doubted for a second that his health would be anything less.

He is autistic. He has ADHD. And he is perfect and brilliant and the biggest joy a parent could ask for

Happy birthday, my oldest son. I pray that God brings you wonderful blessings in this coming year. You are a blessing to us, and I hope that you always know that and never doubt it for a minute.