I’m normally a rather pragmatic person. I rarely am overcome with emotion. I handle everything in life with a stoicism that most people cannot understand. My daughter jokingly says I don’t “feel anything” — and longs for memories that don’t exist of me crying through the pinnacle moments in her life. 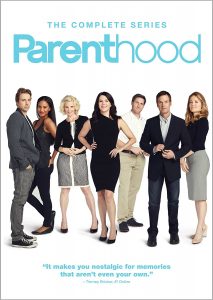 So, the first time I watched the first two episodes of of the show Parenthood, and watched one of the sets of parents struggle with the diagnosis of their son on the autism spectrum, the overwhelming emotion that had me sobbing into my couch pillow really surprised me.

After this wave passed, I sat there, stunned, and wondered what had just happened. As I analyzed it, I realized it was because, for the very first time in this autism journey, I found someone, albeit a fictional someone, who knew exactly what we’d been going through and how I personally felt — even if those emotions were buried deep inside a pragmatic stoic core.

I couldn’t keep watching it. I made it through the first season, but it did too much to the inside of me to keep going.

That was six years ago – right as we were beginning this autism journey and I didn’t know what our future would look like. Recently, I saw that Netflix had it in the lineup, so I rewatched the first episode.  Now, I didn’t end up sobbing into my pillow, but I definitely felt tears slide down my face as those raw feelings of fear and anger and uncertainty felt fresh and new all over again.

I know, in my pragmatic self-analyzing way, that what overwhelmed me was this idea that I’m not alone as a mother, we’re not alone as parents, and Scott isn’t alone as an autistic kid trying to work his way through this world that doesn’t operate properly on his plane of existence. Because, this isn’t an easy journey. It’s hard, and it’s unfair, and we have to work through all of these episodes in his life where he just wants to die because life here is so hard and he’s so very tired of trying to be this triangle peg fitting into a round hole.

Added to the turmoil that comes with that, one day he’s going to be a grown man and every single think we don’t do right could very possibly negatively affect that in a much, much bigger way than it would with our other children — we know this. It is part of this whole life. And we accept it and steadfastly cover him with prayer about it. 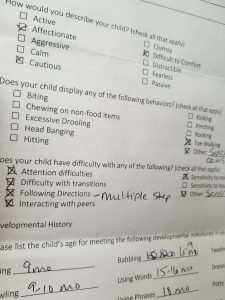 One thing that any parent of a child with medical/special needs knows is forms. Everywhere we take our child as it pertains to their diagnosis or condition, comes with a brand new set of forms that all ask the same questions over and over again. And, every time I fill them out, I find that those are the times when my emotions over being the mother of this incredible kid who suffers so much in this world hit me in extreme.

Part of my issue is because I have to fill out form after form, or squiggle pencil marks into little ovals over and over again, as if to claim, “THIS IS WHAT’S WRONG WITH MY SON!”

I don’t want to focus on all the things that are wrong, that set him apart. I want to focus on all of the things that make him remarkable and his accomplishments that supersede all expectations from before. But yet, that’s not what the forms are looking for. So, I start off angry — angry at nothing and no one in particular — just an emotional reaction to something that should be very vanilla.

And then I start feeling that now familiar overwhelming feeling that we’re not alone in this world. If this question exists on a standardized questionnaire, then someone else must have experienced it, too! Probably lots of someones. And suddenly, the idea that someone out there – this time NOT fictional – understands, can emphasize, could come to me one day and say, “Listen sister, don’t worry. Here’s what I know. Here’s how we rocked it. Here’s how we saw that God had our backs the whole time!”

And I start crying. Me, this stoic unfeeling person who is always taking charge in emotional situations because she’s the one who can think clearly — suddenly I’m sobbing over a stupid form that the therapist or doctor is barely going to glance at because there are enough check marks or squiggly ovals filled in that the answer is obvious.

Not because I’m angry because I have to fill it out again — but simply because it means we’re not alone. I’m not alone. Scott’s not alone.

And someone out there understands.