Join Me This Saturday in Versailles!

It’s funny how my mind works.  I tend to justify away evidence of success.  I don’t know if it’s a lack of confidence or not wanting to get hyped on something that may not last.  Or maybe my mind is just funny. Likely, the latter is the best explanation.

One of the things about indie publishing is that you don’t have a huge base of readers from which to draw, and you don’t have a distribution list where you send books.  You just kind of put a book out there into the wild wild west and hope that someone sees it.  You have an initial surge of sales when all of your friends and family buy your book, and then it slows down to a trickle of sales.  At least, that was my experience.

On the first of February, I was happy to sell five or six books a day.  That’s kind of how I trudged along, and for almost a year that had been the norm.  Then on February 9th, Greater Than Rubies was finally price-matched to be listed as “free” on Amazon.  It immediately climbed the charts of Amazon’s free lists, stayed in the top 10 of free Christian romance and free Christian fiction for a month, and even graced the top 100 of Amazon’s free overall.  And since that first surge to the top 10, it has never dropped below #30 (as I type this, it’s #22 in the FREE Christian fiction).

But I justified it.  “It’s free,” I thought.  “People are just downloading it.  No one is reading it.”

Then my book sales picked up.  Drastically.  I began selling more and more of my not free books.  And, one of the coolest things about it is that I sold a lot of the Jewel Trilogy Anthology.  To me, that meant that people were reading the free book and liking it so much that they bought all three of the trilogy at one time, instead of just buying one book and seeing if they liked that as well.

In fact, so many people bought the the Jewel Trilogy Anthology that, for the first time, I broke a top 100 PAID list on Amazon.  It was listed at #94 for anthologies last week, and it bounces off and on the top 100 list for anthologies all day. 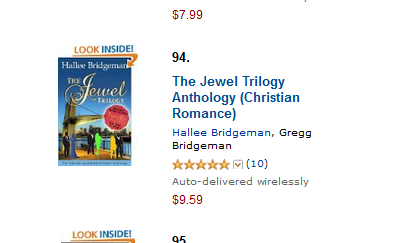 But, I justified that away.  Out of the hundreds of thousands of books on Amazon, how many of them are really anthologies?  Surely, it can’t be that hard to break the anthology top 100.

But, this morning, I woke up to discover that Topaz Heat is #94 in Religious Fiction Romances and #100 the top 100 in Christian Romances.

I’m not justifying that one away.  I’m claiming it.  I just made another top 100 paid Amazon list!

It’s incredibly exciting to be an Amazon best seller while I’m finishing up the new book that will publish on June 15th!  Stay tuned for more information coming about A Melody for James! (And if you want to join the street team, Hallee’s Allies, of this Amazon best seller, click the logo to your right for information!)