Mission of Mercy is Now Available!

The exciting Virtues and Valor serialized story continues with book 6! 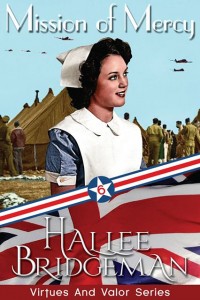 Doctor BETTY GRIMES, miraculously survives the Nazi bombing of her hospital but suffers the loss of her fiancé in the raid. She goes to the countryside to grieve and recuperate and there meets the leader of the Virtues team who recruits the brilliant surgeon.

After months of training, Betty, code-named MERCY, now works in Occupied France as a nurse, where she garners information from patients and passes it to the Allies. Secretly, she tends to injured Resistance operatives, treating gunshots and other wounds that would otherwise draw the attention of the Third Reich.

When Betty is sent to the local prison to see to a prisoner who has taken ill, her shock at finding TEMPERANCE nearly blows her cover. Now Temperance is sick and Mercy needs to get her well enough for the coming rescue operation to succeed.
Can MERCY save TEMPERANCE in time for her rescue, or will her patient succumb to the disease brought on by the torture of the Gestapo?

MISSION OF MERCY is part six of seven serialized novellas entitled the Virtues and Valor series.

Continuing the Virtues and Valor series by Hallee Bridgeman. Seven serialized novellas, each inspired by real people and actual events, reveal the incredible story of amazing heroines facing the ultimate test of bravery. Book 6, Mission of Mercy, is now available at the following locations: