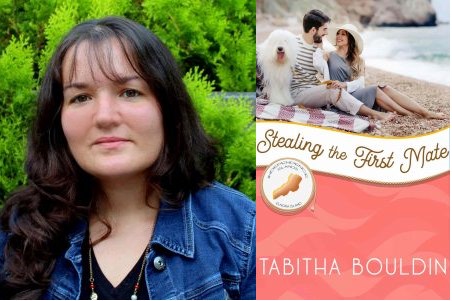 Interview with Tabitha Bouldin and a Giveaway!

Welcome to Readers Write to Know! I asked you, my readers, what questions they would ask their favorite authors if given the chance, and the authors visiting my blog answered them! This week, I am so pleased to have Tabitha Bouldin as my guest. It’s always rare to meet an author who is similar to me in that I didn’t grow up always wanting to write – it just came upon me one day. I love that! I also love friends to lovers books – especially when the man pines for the woman — so her newest release sounds really good! Read on to see how you can enter to win a copy!

Tell us about your current release. Stealing the First Mate is a story of unrequited love between best friends. Nigel works for a Christian-themed pirate boat tour company owned by his best friend’s father. The idea behind the boat tours is to ride tourists around the islands while telling stories and singing songs related to Jesus. Darcy has no idea Nigel is in love with her, and though she’s searching for Mr. Right, she’s never considered Nigel as anything more than a friend. Nigel has loved Darcy since they were children, but a mistake during
his teen years landed him on the wrong side of Darcy’s father and ended with an ultimatum that Nigel never seek to become more than Darcy’s friend.

With all those characters in your head screaming to get out how do you write fast enough to get it all down? I don’t. I have characters from several books clamoring in my head pretty much all the time. If one gets too loud, I jot down a note for their story, then go back to the story I was working on. If I don’t, then none of the stories ever get finished because I spend all my time hopping from one story to the next. I used to try and write bits of different books as they came to me, but I ended up with a jumbled mess that I had to untangle.

What made you take the plunge and finally do it? I’d been talking about getting published, and it always had “someday” in the plan. “Someday, when I finish this book, I’ll see about getting published.” “When I finish the series, someday, I’ll send it to an agent.”
After a while, I realized I was using that as an excuse because I was afraid. I looked at the series I’d written, all those words that no one would ever see if I didn’t get out of my own head and do something about the fear tying me up in knots. I self-published that series, which I still love, and was soon contracted to write the Independence Islands series with Celebrate Lit. If I’d never recognized the fear and pushed through it, I wouldn’t be writing today.

Do you have your plotline and character development already laid out before you begin writing a book, or do they develop as you write? I’m a mix of pantser and plotter. I usually know the lie that the character believes and will have to overcome, but I don’t yet know how
they will reach the goal. My books are character-driven, and I like to give them a loose rein so I get to explore their personalities and see where they need to go. The one time I wrote a complete outline and tried to follow it, I lost all the joy and surprise of discovery. I had to scrap the outline and let the characters do what they needed to do.

What is your preferred method of writing? (computer, pen & paper, etc.) I’m a mix here too. I’d say I write 90% on the computer, but I love sitting down with pen and paper (preferably a purple pen and a spiral bound, college-ruled notebook) to write emotionally charged scenes. Pen and paper is also my go-to for writer’s block. My brain is wired to think of the computer as a place where you make minimal changes and the notebook is my freestyle lane to be as weird and kooky as I want.

Who were some of your favorite authors as a child? (Book series, maybe?) I’ve been a devourer of words since my sister taught me how to read at the age of four. I had so many favorites, but anything with horses was especially captivating. I wore our school library out as a child. My favorite would have to be the Thoroughbred series by Joanna Campbell.
I read and reread every book my library had (which sadly was not the entire collection). As a teen, I jumped into the fantasy genre with absolute glee. My favorites there were Terry Brooks and Anne McCaffrey. I didn’t find Christian Fiction until I was an adult, and I have too many favorites to list them all, but Colleen Coble is at the tippy top.

Which of your characters most reflects your personality? I have a book coming out November 2021 (Footprints on Her Heart) with an introverted character that is more like me than any I’ve written. I’ve had introverted characters before but tended to have them more of an ambivert than a true introvert. Kara refused to let me write her as anything other than a deeply rooted introvert. From the internal agony of meeting new people to feeling faint at the idea of speaking to a crowd, Kara has determined herself to be a big part of me.

Here is where you can find Tabitha online:

Tabitha is giving away an ebook copy of Stealing the First Mate to a reader! See below how to enter to win: https://kingsumo.com/g/qdumdo/stealing-the-first-mate (Note: Entries will be added to Hallee’s and Tasbitha’s mailing lists. You can unsubscribe at any time.):