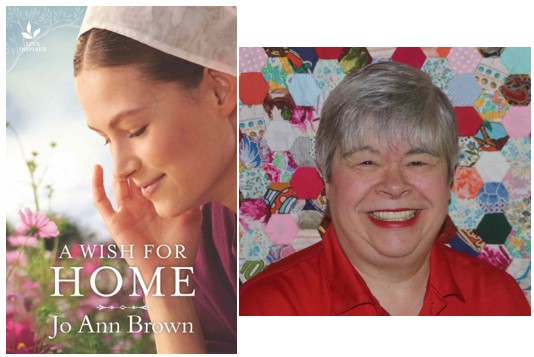 Interview with Jo Ann Brown and a Giveaway!

Welcome to Readers Write to Know! I asked you, my readers, what questions they would ask their favorite authors if given the chance, and the authors visiting my blog answered them! This week, I am so happy to have Jo Ann Brown as my guest! I am a lover of movies, and as such I have read so many movie novelizations – it’s fun to know that Jo Ann wrote that kind of book! She’s giving away two copies of her latest release! Read on to see all the different ways you can enter to win.

Tell us a little bit about yourself. I’ve been coming up with stories for as long as I can remember. I wrote my first book (a nearly 1000 page wonder) in high school, but started writing for publication in the mid-80’s. My first book (under a different name) came out in 1987. Since then I’ve sold over 100 titles in a variety of genres. I’ve done ghostwriting and movie novelizations. In the 90’s, I established the romance writing and popular fiction writing courses at Brown University. My books have been honored with contest wins and now appear regularly on the Publishers Weekly bestseller list. I live in Pennsylvania Amish country with my husband.

Tell us about your current release. A Wish for Home is the first of the Secrets of Bliss Valley trilogy. It’s the launch book for the new Love Inspired Trade line. The books tell the stories of three people who knew each other as children, but never guessed how their lives are truly connected. A Wish for Home which released in print exclusively at Walmart on March 30th. Ebook and audio are available everywhere. The print version will be released widely June 29th. Here’s the cover copy:

Caught between who she is…and who she was.

Lauren Nolt hasn’t forgiven the Amish community of Lancaster County for shunning her parents. But returning as a successful Englischer working for large developers is just what she needs to get a promotion and give her parents the life they deserve. Coming face-to-face with her childhood bully, Amish widower Adam Hershberger, is the last thing she wants. Yet when her world’s shaken by a shocking discovery, Adam’s the only one she can confide in…

Adam’s never forgiven himself for the part he played in Lauren’s past, nor what drove him to do it. But as developers threaten his great-grossdawdi’s farm, she’s the only one who can help. And with his little girl determined to bring him and Lauren together at every turn, keeping his distance is impossible. Now they must learn to trust each other—even as their secret feelings grow stronger. But is love enough to bridge the gap between their very different worlds?

If you knew ahead of time your book would benefit only one person on their spiritual journey, would you still write it? Yes. An author never knows who will be touched by her words. I’ve had readers write to me about scenes that I didn’t consider would ever be important to anyone. Something in that scene touched them and gave them insight that I didn’t even see when I wrote the scene. I’ll go back and read the referenced passage. Sometimes I see it then; other times I don’t, but I’m always thrilled that God used my words to reach out to one of His children.

With all those characters in your head screaming to get out how do you write fast enough to get it all down? I’m a fast writer. I can easily do 3-4 books a year, but there are always more ideas and characters than there is time to write their stories. Instead of writing down the ideas, I leave them in the back of my brain. If the story is truly compelling, it’ll come back and bug me to write it. The important thing for me is to finish one story before starting the next. Upcoming characters can seem so much more fun to write than the current characters, so I can’t let myself get lured away from the work-in-progress. I tried writing two books at once…just one time. I ended up with the hero from one book jumping to the other in a couple of scenes. I sent him back to his story and put one manuscript aside until I’d finished the other.

What’s the first major news headline that you can remember and what do you remember? I’m an oldie. The first one I remember is the Cuban Missile crisis. Probably because every adult I knew was really scared of what could happen.

Who was your first Screen/Musical Crush? My first big musical crush was Peter Noone of Herman’s Hermits. My sister and I were over the moon after hearing his song “Mrs. Brown, You’ve Got a Lovely Daughter.” I got to meet him several years ago, and I instantly turned into that goofy, starstruck little girl all again.

What is your personal, most effective way to get past writer’s block? I’ve got a unique way of dealing with writer’s block. I don’t. When I run up against a wall when I don’t know what to have my characters do or say next (usually say, because one character has said something really strong…and I’m not sure of the strong response back to it to keep the story going and the emotional tension strong), I just go somewhere else in the storyline and work on a different scene. I tend to jump around the story when I write, always working on the scenes that are most intriguing that day. Eventually I knit them together to form the complete ms. Not the usual way of writing, but it works for me and keeps me from getting stuck for days on a single line.

I assume when you start a book, you pretty much have the plot laid out. Do you ever change your mind later on in the book, and go in a different direction? I have to write a synopsis of the story for my editor before she’ll approve a story idea. It’s kind of like writing a book report about a book that’s not written yet. When I get the go-ahead to do the book, I reread the synopsis and then go to work. I’ll reread the synopsis when I get the first draft done to make sure I didn’t drop a story thread that I’d put into the synopsis. Sometimes, I’m amazed at how closely the finished manuscript is to the synopsis. Other times, the resemblance seems merely coincidental! No matter how much I build the story and the characters before I start writing, often they have secrets up their sleeves that they don’t reveal until I’m deep into the story. Having an epiphany that changes the course of the story and brings out the emotional growth of the characters always fun, though it may mean a lot of rewriting.

Do you remember where you were or what you were doing when you started this story? Usually stories creep up on me, fascinating tidbit by fascinating tidbit, but for A Wish for Home, I know exactly where I was. In a panic! I was meeting with my Love Inspired editor at the Romance Writers of America conference in New York in July 2019. My agent had suggested I talk to her about doing something “bigger” – something more emotional complex and with rawer issues for the characters to deal with – at the conference. I came up with an idea I really liked and pitched it. Something I don’t do well, I’ve got to admit – I’m better with written words than spoken ones in those situations. My editor listened, then asked, “What else do you have?” That means, she wasn’t thrilled with the first idea, and I needed something to knock her socks off. I brought up an idea that had been a mere wisp at the back of my brain. She loved it and asked to see three chapters and a synopsis. I couldn’t wait to get home and work on it. The characters and the situations exploded out onto the page. Now neither the whole first book or the second one (I’m starting on the third one next) wrote that easily, but the kernel of an idea has grown, and I’ve come to love the characters and their struggles to find themselves and love while depending on their faith.

Here is where you can find Jo Ann online:

Jo Ann is giving away a copy of her book A Wish for Home to two readers! (US only) See below how you can enter to win:

(Note: All entries will be added to both JoAnn’s and Hallee’s newsletter lists. New subscribers to Hallee’s list will receive a free copy of the ebook Courting Calla.)