Monday Morning Coffee and Chat 6/17 – What Do You Like About Writers Conferences? And a Giveaway!

Interview with Heather Greer and a Giveaway!

Welcome to Readers Write to Know! I asked you, my readers, what questions they would ask their favorite authors if given the chance, and the authors visiting my blog answered them! This week, I’m bringing you Heather Greer. I met Heather at the Blue Ridge Mountains Christian Writers Conference and LOVED every conversation I had with her. She and I connected, and reading her interview I now know we connected on a fundamental, geeky level as fellow Doctor Who and Sherlock fans. (heh) But more, I love her heart for Jesus and her family, and I am thrilled that she is here with us today. Read on to see how you can enter to win her latest release!

Tell us a little bit about yourself. I am a writer who is passionate about helping believers grow in their faith walks. I’m a pastor’s wife (which I honestly never thought I’d be after growing up as a preacher’s kid) and mother to four wonderful children. Two of my children are married, and the other two are still at home. I have the most amazing five year old grandson who I try to keep supplied with all the best chidren’s books. I love to read, bake, and binge watch my favorite television shows. I tend to geek out about things like Doctor Who, Sherlock, and the Lord of the Rings. And I can’t forget my all-time favorite movie, The Princess Bride.

Tell us about your current release. Grasping Hope is the sequel to my first book, Faith’s Journey. Katie McGowan is planning her wedding to Austin, but that doesn’t mean everything is going smoothly. Katie is struggling with emotional baggage from her first engagement that ended after her fiance was unfaithful. Grasping Hope takes us through Katie’s struggles to learn what hope is and where it comes from. Even after she thinks she has it all figured out, Katie learns circumstances can change in an instant testing the lessons we thought we’d learned. 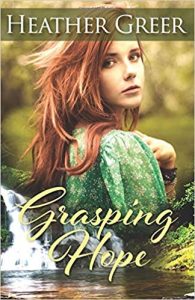 If you knew ahead of time your book would benefit only one person on their spiritual journey, would you still write it? Definitely. I like to remember that while “God so loved the world”, He would have gone through everything He went through even if I was the only one who would accept His gift. If God is that way, I think we should be too.

What’s the first major news headline that you can remember and what do you remember? I think it would have to be the Challenger explosion. I was ten, and with a teacher aboard, it was a big deal in school. It was the first time I felt like the news was connected to me in some way.

Who was your first Screen/Musical Crush? I actually remember two different t.v. crushes from about the same time. It’s embarassing, but I wasn only around six years old. The first was Greg Evigan from B.J. and the Bear. My two older brothers liked watching the show, and I decided I didn’t mind watching it with them. The second I shouldn’t have known about at six years old! My great-granny would babysit me, and she always had to watch her story at lunch. Her story just happened to be The Young and the Restless. Michael Damian played an older teen or young adult named Danny Romalotti, and I remember thinking he was really cute.

Who were some of your favorite authors as a child? The first books I loved were the Berestain Bears books. I loved library day at school, because I could always get a new one. As I got a little older I remember loving Janette Oke’s Animal Friends story series. In middle school and junior high, I loved the Cedar River Daydreams series by Judy Baer and the Christy Miller series by Robin Jones Gunn. In high school, anything by Lori Wick or Linda Chaikin became favorites. Now, I blog reviews regularly. So, I find new authors to love all the time. My husband isn’t thrilled about that, but I tell him buying new books is now part of my job! However, my favorite writer is Kristen Heitzmann.

I’m always intrigued by how writers get started…did you always have these books inside you and knew that you wanted to write them or did the idea just pop into your head one day and you decided to put pen to paper? I’ve wanted to write since I was a child. But I had a love-hate relationship with creative writing assignments in school. I loved to get them. But I had teachers who were less than encouraging at times. I didn’t write what they wanted, and they didn’t hesitate to mark 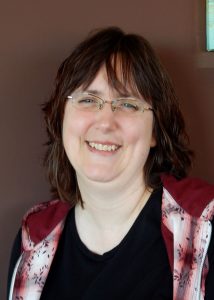 down my grade because of it. I never won the contests our work was submitted to. These don’t sound like much, but to a girl who struggled with self-confidence, they were pretty big blows. But I couldn’t shake the stories in my head. The books I’d read meant so much to me that I wanted to give the same experience to others. So, I couldn’t give up. My ideas come from a variety of places. I’ve written about things I love, things my children’s interests have inspired, lessons that I’ve learned, and situations that sparked an idea. Sometimes a person, place, or Bible verse starts the story for me. It changes with each story I write.

I assume when you start a book, you pretty much have the plot laid out. Do you ever change your mind later on in the book, and go in a different direction? For me, that assumption would be wrong, at least most of the time. Whatever starts the idea in my mind usually brings me to the opening scene. From there, I don’t necessarily know where the characters are headed. My first book, Faith’s Journey was born out of the idea of what someone deals with when they’ve been betrayed and how it would affect them if they didn’t have faith to help them through. The book begins with the betrayal. Several chapters into the book the end made itself clear. In fact, I actually wrote the first third and then the last third of the book before finishing the middle! But it wasn’t until I was into the story that I figured out where it was heading. I had to let Katie develop and decide where she would go. With so much of the story already written and the characters developed, I had a better idea of the plot details for the sequel, Grasping Hope, but even then there were some surprises as I wrote. With the third book, I know what I want to show and where I want Katie’s story to end up, but the details of how to get there are still working themselves out.

I often wondered….when you sit down to write that first line/paragraph in a new book/novella, is it difficult to get that started or do the words flow easily? Usually, I find it easy to get started. I either come to it with an idea, scene, or person that’s really grabbed my attention. I’m excited by it, and like a child with a new toy, I don’t want to put it down. It’s further into the story that I usually have more trouble. I’ve made it through the beginning, and I know where I want to end up. But there are times when the events in the middle leave me anxious to get where I’m going. When that happens, I struggle to push through.

Here is where you can find Heather online: