Interview with Davalynn Spencer and a Giveaway!

Welcome to Readers Write to Know! I asked you, my readers, what questions they would ask their favorite authors if given the chance, and the authors visiting my blog answered them! This week, I’m so excited to have Davalynn Spencer as my guest.  You know that a former rodeo reporter and wife/mother of rodeo clowns can write some seriously good cowboy romances! I loved her interview, her advice for aspiring writers, and especially love that she wanted to be my guest this week. Read on to see how you can win a copy of her latest release (which sounds so good!)

Tell us a little bit about yourself. As the wife and mother of professional rodeo clowns, I spent plenty of years on my knees outside the arena praying! But rodeo is also where I got my start writing nonfiction—there’s nothing make-believe about some of the wrecks I’ve seen. However, I always wanted to be a novelist, so after several years as a newspaper crime-beat reporter and rodeo journalist, I went after my dream. I also put all those years around cowboys to good use, and 15 out of 16 of my published titles—both historical and contemporary—have a cowboy hero. Gotta love ‘em, right?

Tell us about your current release. High-Country Christmas is a two-novella collection of 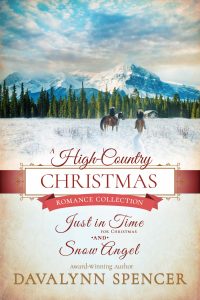 unrelated stories set in the high country of Colorado’s Rocky Mountains. In Snow Angel, Lena Carver lost something precious as a child at Christmas. Twenty years later, she’s about to lose her heart when a bruised and broken cowboy shows up at her physician brother’s home with a bullet-creased scalp and a mysterious dog. Just in Time for Christmas is the story of Abigale Millerton and the boy she grew away from. However, when she returns home to run her grandfather’s ranch, her neighbor Seth Holt is there waiting, as determined and true as ever.

With all those characters in your head screaming to get out how do you write fast enough to get it all down? What a great question! Writing fast isn’t the answer for me – it’s writing everywhere. I think I have the corner on the sticky-note market, and they litter my desk and computer screen. However, I’ve journaled since the sixth grade, so most of my ideas start there, in whatever color notebook I’ve chosen for the year. I’ve always said I self-medicate with words, so if it has to do with words, it’s in my journal.

How do you push past the fear of your writing being average and be bold enough to sell it to a publisher(or agent or audience if you self publish)? I write because I have to. It may have helped that I started as a journalist and developed a thick skin to criticism and a warped sense of time where deadlines are concerned. I’m simply compelled to write, whether anyone reads it or not. But I believe the big push for me came several years ago when I read a novel by a well-known author and was surprised at the style, wording, plot – everything. “I can do that,” I thought. So I did. By God’s grace and gift, I did.

What is your personal, most effective way to get past writer’s block? I’m not sure if I experience writer’s block the way other authors do. Rarely does a blank page (paper or pixel) stay blank if I’m within pencil distance. But sometimes I have trouble transitioning from one scene to the next in a story. When that happens, I scroll down in the document where I’m working and write another scene, completely unrelated to the one I’m struggling with. Once I wrote the ending to a story before I had reached the halfway mark. And that’s saying something for me, because I’m primarily a seat-of-the-pantser. No outlines for me, thank you very much.

What made you take the plunge and finally do it? I always wanted to drive an old Volkswagen beetle (bug). “Someday I’m going to have a VW bug,” I’d say. But it didn’t take long to realize that someday was never going to just show up and say, “Here I am. Time for a bug!” So I gathered my savings, hunted the newspaper, found two bugs (older models from the 70s) and bought one. That was only the beginning.

I always wanted to be a novelist too, and I read everything I could get my hands on. Soon all the articles were blending together and saying the same things. No one was going to write my book for me, so I set out to finish and sell the one I’d started. That was twelve years ago, right after a well-known author at a writer’s conference told me it was too late, that I should have started years before.

My tough, former-reporter skin got in the way of that advice, and my sixteenth title releases next summer.

What advice do you have for aspiring writers? My advice is simplistic and mundane. It’s 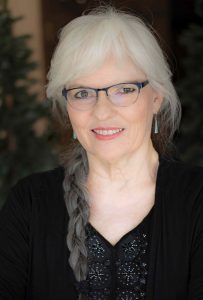 been repeated by countless people in various positions of leadership, stardom, whatever. Even Winston Churchill is reported to have said it.

Don’t quit. Never give up. You will fail only if you stop.

Where’s the strangest place you’ve ever had a great writing idea? In the parking lot at Big Daddy’s in Canon City, Colorado. A woman in the driver’s seat of the parked car facing me was on her cell phone, and in a flash, I got an entire story about a gal on the run from her money-hungry uncle/guardian who was forcing her into a money-making marriage. So she ran.

I assume when you start a book, you pretty much have the plot laid out. Do you ever change your mind later on in the book, and go in a different direction? I once got in an argument with my heroine about what her dog was going to do. (I know, that’s crazy. But you’re asking questions of a person who writes about people that don’t exist.) After a mind-bending discussion, I acquiesced and went with what she wanted. It worked. Actually, it was much better than what I was going to do because it ratcheted up the tension and the stakes.

Here is where you can find Davalynn online:

Davalynn is giving away a signed copy of A High-Country Christmas to a reader! See below how to enter to win: a Rafflecopter giveaway