Interview with Tammy L. Grace and a Giveaway!

Interview with Betty Thomason Owens and a Giveaway!

Welcome to Readers Write to Know! I asked you, my readers, what questions they would ask their favorite authors if given the chance, and the authors visiting my blog answered them! I love it when I have a personal friend as my guest. This week, I’m bringing you Betty Thomason Owens. We serve together on the Kentucky Christian Writers Conference planning committee and are members together in the Louisville chapter of the American Christian Fiction Writers. We have shared many meals together, I’ve had her and her husband as a guest in my home many times, and we have spent hours praying together. I hope you fall in love with her as much as I have! Read on to see how you can enter to win a copy of her latest release!

Tell us a little bit about yourself. My name is Grandma. It’s a title of honor and I love it. Aside from that, I’m a wife and mom, of course. I raised three sons and apparently used too much fertilizer. Two of them are 6’3” and the short one is only six foot. My husband and I have been empty nesters for quite a while, and we love it. I’m also an author, another title I love. I’ve been writing for about thirty years, but I have only been a serious author since the late nineties. I write fantasy and historical romance.

Tell us about your current release. Annabelle’s Joy is book 3 of the Kinsman Redeemer series. It’s the final book in the series, so I did my best to tie up all the ends. 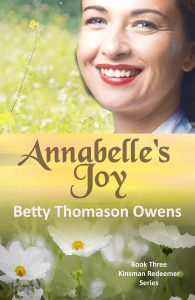 Book one, Annabelle’s Ruth, was inspired by the Book of Ruth. Annabelle is the Naomi character. In this final chapter, she’s found peace and is beginning to heal from her tragic losses. It’s also a story of community and family, set in 1950s rural west Tennessee. Tom Franklin, a man she’s been avoiding, is building a new house right next door. Annabelle tries to ignore her growing attraction to him until a new single lady moves to town and plants herself between Annabelle and Tom. Sometimes competition is exactly the catalyst needed to bring about the desired conclusion.

If you knew ahead of time your book would benefit only one person on their spiritual journey, would you still write it? I absolutely would. It is such a blessing to hear that a reader has been positively impacted by something I’ve written. There’s nothing sweeter.

Do you feel pressured to compromise your standards in order to reach a larger audience or be more successful? I used to worry about it. Would I sell more books if I wasn’t writing inspirational fiction? Though nice, selling a lot of books is not the main concern. If I’m called to write, it’s my mission. My life’s goal has to be to fulfill my mission and glorify God through it.

What’s the first major news headline that you can remember and what do you remember? I was sitting in my fifth-grade classroom in Milan, Tennessee, when a young boy came to the door, tears streaming down his face, to announce: “The president has been shot.” With my classmates, I sat in stunned silence as our teacher covered her mouth and tears streamed down her face. One of America’s most famous and beloved presidents, John F. Kennedy had been assassinated. I will never forget that moment.

Do you have pre-determined length in mind when you first begin a book? Yes, I like to work toward a goal. The genre determines length. The fantasy books I wrote were closer to 100K, but the historical novels run 80 or 90K.

How did you make the initial step into writing your first novel. What were some of your major roadblocks and how did you overcome them? My first roadblock was not knowing what I was doing. Hah! When the inspiration to write first came, I tested the waters by writing short stories. I took a short story writing class at a local college. The professor encouraged me to continue writing, but he said I was not a short story writer. I needed a longer venue. So’ I sat down and wrote until it ended, almost a hundred-thousand words later. Figuring out what to do after that was the most difficult step. There’s a part of me that fears change and another part that is terrified of success, so it’s a constant battle. 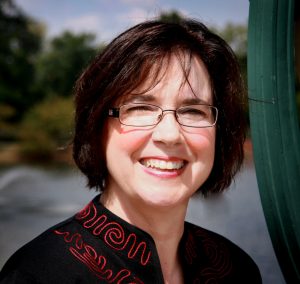 The next step was to attend a writers’ conference, which hooked me. There was no turning back. It’s continuing education, encouragement and inspiration.

I assume when you start a book, you pretty much have the plot laid out. Do you ever change your mind later on in the book, and go in a different direction? Yes! I’m a character-driven writer, so I tend to follow my characters through until the end. I may have an idea where I’m going, and occasionally, I may change direction to stay on the path I want to go, but the character still has the final say. Right now, I’m working on a suspense story. When I tried to take it the direction I wanted to go, the inspiration completely dried up. I’d reached a dead end and had to circle back. I actually started over. When I caught on to the character’s voice, the inspiration and the story was there, so I let her take the lead. Turns out, she wanted to tell the story. I can’t wait to see where it takes me.

What is one thing that you “never saw yourself doing” and either do it now or have done? There are several: I never dreamed I’d be a published writer. I certainly never expected to be signing books at a Barnes and Noble. I never saw myself teaching a seminar on writing, but I’ve done that, too—in Cuenca, Ecuador!

Here’s where you can find Betty online:

Betty is giving away a copy of Annabelle’s Joy to a reader! See below how you can enter to win:a Rafflecopter giveaway