The Jewel Trilogy Anthology is Now in Paperback!

Welcome to Readers Write to Know! I asked you, my readers, what questions they would ask their favorite authors if given the chance. This week, I am so pleased to introduce to you Patty Gordon, writing as Patricia Kiyono.  The Samurai’s Garden sounds like an absolutely fascinating story.  I love the fact that Patricia wrote her current release while vacationing on the Jersey Shore right after retiring from teaching. Please enjoy her interview as much as I did.

Thank you so much for having me on your blog today! 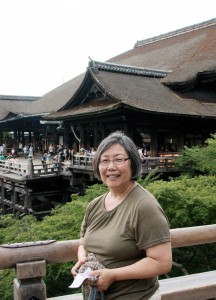 I’m a retired elementary schoolteacher, mom to five kids aged 25 through 43, grandmother to eight and counting. I was born in Japan,  but came to America before my first birthday. Other than four years at Illinois State University, I’ve lived in southwest Michigan since then. Since retiring from full-time teaching, I’ve been able to pursue my dream of writing and am so pleased to have found a writing home at Astraea Press.

The Samurai’s Garden takes place in the 1870s in Hokkaido, the northernmost island of Japan. Hiromasa Tanaka was a samurai soldier, but the new emperor had put a sudden end to the entire feudal system, and the samurai class no longer existed. He had to find a new purpose for his life, and he found it in the peaceful setting of Hanako’s farm.

When I get stuck I move on to another part of the book, or else work on another project. I’m also lucky to have two wonderful critique partners who are great at finding holes in my stories and suggesting ways to fill them!

I like to write, but I don’t care for the extra work required for self-publishing. I’m not particularly artisitic, and I didn’t want to pay an artist to create a cover for me. I know how to use a computer for writing, blogging and a few other things, but don’t have the patience to learn all about formatting (other than what is required by my publisher). So going with a smaller epublisher was a perfect fit for me.

For this particular book I did a LOT of preparation – I filled out character sheets, specified the goals, motivations, and conflicts, and had several specific scenes in mind soon after I began writing. But writing a historical requires extensive research, and my characters took me on a lot of side trips! Some interesting minor characters also jumped in, and the villain took on a much larger role than I expected.

I have problems hanging on to paper. Organization is not my strong suit, so using a computer is a must.

As a child I enjoyed The Boxcar Children and The Bobbsey Twins. I think I appreciated the way they were resourceful and independent.

I like to think I’m a little bit like Reiko, the neighbor who mentors Hanako (the heroine). My life hasn’t been terribly difficult, but I’d like to think I’d be strong and resourceful if I had setbacks and heartbreak like she had. She has a great relationship with all her children, and she happily takes Hanako under her wing.

Yes, I do! I had just retired from full-time teaching, and my daughters and I went to the Jersey Shore for a week vacation. I’d had the plot whirling around in my head for some time, and I’d already done the character sheets, and I was ready to begin writing. Since my daughters were old enough to be on their own, they went to the beach, and I stayed in the cottage, writing! It was wonderful. I wrote almost 40K that week.

Blurb for The Samurai’s Garden:

Hiro Tanaka prepared for a life as a samurai warrior. But his world changed when Japan’s feudal system was abolished by the Emperor. Now, he must find a new vocation. Disillusioned with fighting and violence, he travels alone, going north to the island of Hokkaido.  Many other samurai wander through the country and are known as ronin. Some have forsaken their honorable way to prey on the less fortunate.

Hanako Shimizu experienced first-hand the devastation caused by these disreputable wanderers.  The previous winter, they raided her farm and killed her husband. Now, she needs to rebuild but has no money and no prospects — except for the dubious intentions of the town merchant.

When Hiro, tired of his wandering, encounters Hanako in the market, arguing with the merchant, he poses as her late husband’s cousin then offers to help her on the farm in exchange for a place to stay.  Working on the land, Hiro finally finds the peace he has been seeking. But the reappearance of the rogue ronin, led by an unscrupulous leader from Hiro’s past, forces him to take up his swords again. But now, the stakes are higher.

This time, he’s fighting from the heart.

The Samurai’s Gardenis available at Astraea Press, Amazon, Barnes and Noble, and other ebook distributors.