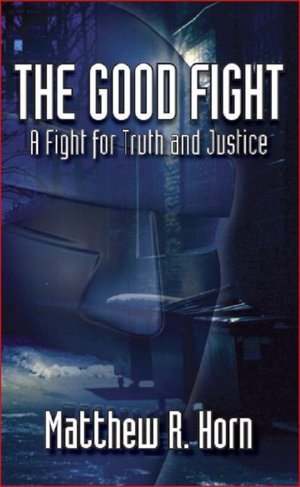 In my world of romance writers, it’s so refreshing to have a guest on my blog who is a man and who writes a different kind of story.  The one he talks about in this interview is about a masked vigilante, a hero, the war internally and externally between good and bad.  I am excited to introduce to you author Matthew R. Horn. 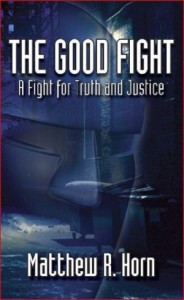 I live in a small town in north central Indiana with my wife and our newborn Ella (10 weeks old).  I am the Chief Financial Officer for our small family company Modern Materials, Inc.  I am an active guy, I love to play basketball and tennis.  I love water activites like skiing, wakeboarding, kneeboarding, and swimming.  My wife and I both love to run or go for walks.  I am a deacon at Macy Christian Church and I often counsel people on personal finances.

The Good Fight was released by Brighton Publishing in September ’11.  It is my first published work and is 200 pages long.  It is about a young boy named Jeff who is bounced around from family members to orphanages before finally ending up on the street.  After getting into some trouble, his life is saved by a dark-suited vigilante.  The instance is life-changing for Jeff who goes back to the orphanage and goes back to school.  16 years later, Jeff has the opportunity to save the life of the vigilante.  In doing so he learns the man’s identity, only he is not quite the hero Jeff thought he would be.  Jeff becomes the hero’s reluctant protege, and eventually is forced to decide to either wear the suit himself to stop his former mentor, or let things be and try to continue on with his life.  The decision will affect everything that Jeff has worked so hard to become.

Writer’s block is a real doozy.  I have tried a lot of things.  My most prolific failure was to start 8 different book ideas at the same time.  At the time I figured my problem was my interest level and that if I had a lot of books going all together that surely at least one of them would interest me.  That really didn’t work.  What I’ve come to find is that sometimes I’m blocked and there just isn’t anything I can do about it.  I wait patiently until my next idea comes and then get back to it with a passion.  Patience really is the most effective way for me.

Growing up I can remember times when I tried, but nothing really took and I never said anything to anyone or made a big deal out of it.  When I came up with my first book, a fantasy novel called Heroism (unpublished currently) I let my immediate family read it and one or two friends.  Everyone was shocked that I had even tried in the first place.  I remember where I was and exactly what I was doing when I thought to myself “I can try this”.  It was very sudden, but I am very thankful to have discovered this as a hobby/passion.  It’s very rewarding and gives me such a feeling of accomplishment.

Quite frankly I was really appalled at the disgust most people showed about being self-published.  It seemed that there was no credibility in it.  I think that the market is clearly smashing that archaic idea into oblivion.  However, I was scared to go that route because of the preformed notions.  I searched and searched to no avail for an agent, only now understanding why it never worked out, but that only made me search for smaller publishers rather than try to go it alone.  I was thankful to have discovered Brighton Publishing.

I always outline before I begin.  That being said, it is a very general outline.  I know how I want the story to unfold and I know what type of person my character is.  However, just because I know he’s a nice guy doesn’t tell me that he also is allergic to shellfish.  Those types of quirks and personality traits develop as the story moves itself.  The same goes for the story.  I may know that the hero kills the villain at the end, but as to how and how they get there, God is the only one who knows how that will end up.

Absolutely.  I found that especially for a first-time author, 200-300 pages is the max length publishers are willing to go.  The cost of a hard cover, 500 page book is phenomenally high.  Most publishers won’t take a look at me if I don’t have a great track record and my book is large.  The first book I wrote was way too large.  When I write now I consider the length, but I try to let the story tell itself.  If it is too large I try to figure a way to split it into several smaller books.

Ask questions all the time.  There are many forums online, book clubs, marketing networks, etc. that are willing all the time to accept new members and answer questions.  How do I get a Facebook author page, what is Amazon Author Central, should I blog, how do I get people to follow me on Twitter, etc.  These and many, many other questions were asked by me and probably every other author to write a book in the last 10 years.  They are valid questions and somewhere there is someone who can answer them.  Please don’t ever feel foolish for asking a question.

I definitely prefer my computer.  I do find it harder to write on a laptop.  Usually the keyboard is a bit different than a normal PC keyboard.  Pen and paper I think would end up in some horrible hand disease, lol.  I also prefer a nice quiet area and usually some type of great inspiration.  Sometimes I listen to music.  I like to try and visualize what I am writing and some strongly themed music can help to do that.

How did you make the initial step into writing your first novel? What were some of your major roadblocks and how did you overcome them?

It blows me away now to think back on how “green” I was to the industry.  When I wrote Heroism, I didn’t realize how many words normally go on a single page, how hard it would be to find an agent/publisher, how much marketing is involved, etc.  I wrote because I enjoyed it and if only my family ever read anything than fine.  Clearly the biggest road block is marketing.  The Market is changing so much today that social media and authors marketing themselves in an absolute must.  I didn’t even have a Facebook account until The Good Fight was release in E-book format.  My wife helped me start my first Facebook and Twitter accounts and taught me how to use them.  Since then it’s been a real learning experience and I would encourage any new author to find places where they can ask questions.  There is always someone willing to help.

My favorite author was Clive Cussler.  I absolutely loved his Dirk Pitt series.  I think the most influential though was C.S. Lewis.  The Chronicles of Narnia and how he wrote them are what I strive to be like as a writer.  He was a magician with the written word.

Both, in a very big and real way.  My first book, the fantasy called Heroism (unpublished) was about 600 pages and I wrote it in about 6 weeks.  It was full of errors of course, but the storyline just basically fell out of my fingers as if it had been standing on the edge of a very tall building.  All I had to do was give it a nudge and it plummeted right out of me.  The Good Fight, however, was very different.  I remember sitting at a conference with my wife when the idea hit me.  My wife later helped me changed the story a bit, but it came to me in a very different way than Heroism.

I regularly write my characters into huge holes and have no idea how to get them out.  I see storyline in my head and I just write the characters as responding.  However, that sometimes leads to major dead ends.  This usually ends up in lots of research, running the story by friends and family, and lots and lots of contemplating.  I have yet to get into a situation where there isn’t a way out that works if you just look deep enough.  Sometimes it has to get darker before it gets lighter, you have to crawl before you can walk… you can choose whatever line you want, but there is a lot of truth there.

My wife and I had taken our church Youth Group to the Indiana Christian Youth Convention.  I had tuned out because I didn’t much care for the speech we were listening to and I had a sudden inspiration to write a book about a young hero taking the place of an older hero.  I pulled out a piece of paper and finished outlining the story before the talk was over.  Later I pitched the idea to my wife on our way to Chicago to meet some family for Thanksgiving.  She told me it sounded boring and added some conflict for me between my main characters.  It is almost as if it were yesterday and it was over 2 years ago now.

E-Book at Barnes and Noble