Muse Monday Will Be Back

Welcome to Readers Write to Know! I asked you, my readers, what questions they would ask their favorite authors if given the chance. This week, I am happy to introduce to you paranormal author Carrie Pulkinen.  Carrie grew up next door to a cemetery, so the slide into authoring paranormal stories seemed like the natural thing to do.  Her current release mixes Scottish vampires with American werewolves, which just sounds fun.  I also love that she wrote out a story idea on a bunch of cocktail napkins.  I have been there and done that myself!  I hope you enjoy her interview as much as I did.

I’ve always been fascinated with the paranormal. Of course, when you grow up next door to a cemetery, the dead (and the undead) are hard to ignore. Pair that with my passion for writing and my father’s insatiable love for monster movies, and you’ve got the perfect recipe for an exciting story.

Reawakened is a paranormal romance with Scottish vampires and American werewolves. What more can a girl ask for?

Her magic has been reawakened. But will her heart let her follow her destiny?

Jules Hume lives in a world where magic is a myth and supernatural creatures are fiction. Or so she thinks. Her boyfriend Ian would have to disagree. When Jules discovers the man of her dreams is not only a vampire, but a vampire king who’s tasked with saving the world from a demon attack, life as she knows it ends. Can she accept her fate and take her place by Ian’s side as ruler of the paranormal world? Or will she close her mind and her heart to the chance at love and adventure?

I’ve been writing for as long as I can remember. But, not always fiction. I started writing for my small town newspaper when I was in junior high school. I taught high school journalism and worked in marketing before I sat down to write my first novel.

I was at a convention with some friends, and we spent a lot of time waiting in lines. To pass the time, I made up stories to tell them (which I thought everyone did when they were bored). They loved my stories so much, I figured I’d try writing them down. I thought, “I wonder if I could write an entire novel.” So, I sat down one day and got started. Six weeks later, my first draft was finished! 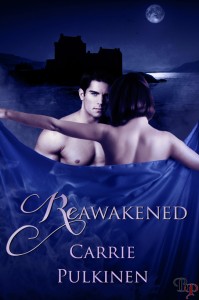 No. I usually have an general idea of how I want the story to go. And I know the basics of my characters. But, they develop as I write, and they end up telling me how the story is going to go.

Definitely the computer. I make too many mistakes and end up changing too much to write it out by hand. Plus, my brain moves faster than my hand can write!

For my current work in progress, I was at a bar in New Orleans. I borrowed a pen from the bartender, and ended up filling up three dinner-size napkins with my ideas.

I get ideas randomly. I like to play the “what if” game. Like for Reawakened, the idea started with an idea for a conversation I came up with. What if a woman and her adult daughter were having lunch, and the daughter told her mother that her boyfriend was a vampire? What would that look like? I started writing it, and the rest of the story came from there.

A little of both, I guess. Mostly for my own enjoyment, though. I figure if I’m having fun writing it, people will naturally have fun reading it!

Jules from Reawakened has a lot of my own personality in her. So does Logan from To Catch a Spirit.

I usually just keep writing, even if it’s junk. I know I can always go back and edit it later.

It happens often, actually. I’m not much of a plotter. I first concern myself with the characters, and then I let them tell me the story. I might have an idea of where the story should go, but the character may have his own idea. I always follow my characters’ leads.