Welcome to Readers Write to Know! I asked you, my readers, what questions they would ask their favorite authors if given the chance. This week, I am pleased to introduce to you, Christian Cozy Mystery author C.L. Ragsdale.  I LOVE cozy mysteries, and C.L. delivers one that includes a “helpful” ghost.  Her books are quick, fun reads (her blog tagline is “Good Stories, Just Less Words”) that bring a supernatural mystery but also help share the Gospel of Jesus Christ.  It’s nice to have another author on here who also embroiders and knits — I often worry that I’m splitting my creative side! 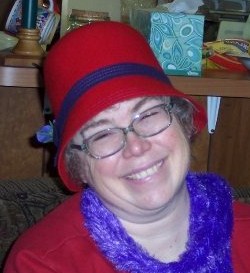 Well I guess I should warn you this is going to be short and not very interesting. Besides writing I love to embroider (which I am good at) and knit (which I am only fairly good at). I’m not married and I have no children, although nephews and nieces, and great-nephews and nieces (yes I am that old) makes up for it. My mother lives with me and I feel very blessed for that. I do not have impressive educational degrees, writing awards or what most would consider an interesting life. In other words, I’m boring. However, I do love to write and believe it is a ministry the Lord called me to do, and I wouldn’t change any of it unless of course God has other plans.

2.  Tell us about your current release.

My current release if Book Number 4 in my Christian Cozy Mystery Series called The Reboot Files entitled The Wrong Ghost.  This time Reboot ghost buster Irene Waters is off to picturesque Lake Morona to investigate rumors of the ghost of a vengeful female spirit haunting its shores. Pretty standard fare for Irene and her cameraman Troy Stenson except for few odd things. First they learn that their boss, Bernie Youngman, had previously passed on covering this particular ghostly tale. Now he has not only changed his mind about covering the story but has even insisted on coming along. Then they find that Reboot has competition for the story, and to Troy’s dismay it is his former employer who is the competition! Then there is the “ghost” who is just a little bit too cooperative, and it may not even be the right ghost. Of course there is a plethora of suspects, but motivations are not so clear. Worse still, the mysterious Records Department is lurking in the shadows planning who knows what. Well I do but that’s to be expected.

3. What is your personal, most effective way to get past writer’s block?

Just to keep writing. It may not fit at all in the plot, and I’m probably going to have to delete it all, something I hate to do. But eventually a word, a line, a character change sparks something in my brain and the ideas stat flowing again.

4. What inspired you to start writing, or did you always want to write?

My Mom told me that before I could read I would take my sister’s comic books, sit under the kitchen table and make up my own stories to go along with the pictures. So I figure I was pretty much doomed.

5. How did you determine whether to self-publish or seek a traditional publisher?

Well for me it was an easy decision. I did some research and discovered that due to publishing costs traditional publishers want a higher word count especially from new authors. The word count for a novel can vary widely, but the minimum is usually at least 50,000 to 60,000 words. Mine are about half that length mostly because that’s where the story ended. When I tried to expand it to a novel length I felt like I was trying to make a word count rather than advance the story. Since my length works well for e-books self-publishing was it the logical route to take.

6. What made you take the plunge and finally do it?

Well I wrote the book, I felt like I had to do something with it. Seriously, what did I have to lose?

7. Do you have your plotline and character development already laid out before you begin writing a book, or do they develop as you write?

I have tried outlines, really I have, but they don’t work for me. For me, the storyline hardly ever goes as expected and then the characters start to rebel on me and demand a rewrite. I know that sounds weird but I think that’s what authors do, argue with themselves. Anyway, the book I outlined is not the one I end with. So I gave up on the outlines and just write the thing.

8. What advice do you have for aspiring writers?

Writing the book is the easy part and it’s not that easy. Whether you go traditional publishing or self-publishing, you’ve got a lot of work ahead of you. You may have the next best seller, but it may take a while, if ever, for everyone else to catch on. You’re going to have to take criticism, whether deserved or not, and you may not sell a lot of books. So my advice is not to go into writing because you want to become rich and famous, although that would be nice, go into writing because you love to write and you feel the Lord has called you to do it. That’s the only thing that makes the negatives worth it.

9. What is your preferred method of writing? (computer, pen & paper, etc.)

Oh the computer definitely. It’s just easier for me.

10. I’m always intrigued by how writers get started…did you always have these books inside you and knew that you wanted to write them or did the idea just pop into your head one day and you decided to put pen to paper?

Well ideas do pop into my head, but it usually occurs when I’m writing. For example, The Reboot Files series was not the idea I started out with. The idea I had was a plot about a supposedly cursed treasure, everyone getting lost in the deep, dark woods, trying to find it, and a rouge bear on their tails. I named the book and even wrote about a quarter of it. However, the plot wasn’t working, the characters were unpleasant, and I just didn’t like the way things were going. Just when I was about to give up in frustration and delete the whole thing I made what seemed at the time to be a minor change. I added a character named Irene. Really, that’s all it took. That one character that came from nowhere became the main character and lead to the creation of the series.

11. Do you write your books for your own enjoyment or more for what you think people would want to read?

Oh for my own enjoyment definitely. If I don’t like what I’m writing, no one else will.

12. Which of your characters most reflects your personality?

I would like to say Irene Waters my wise and brilliant sleuth, but it’s her overeager cameraman, Troy Stenson, who is the most like me. He tends to rush into things, thinks he has everything figured out when he doesn’t, and says things he maybe shouldn’t say and is sorry afterwards. But he’s young. Maybe by the time he gets to be my age he’ll learn to slow down and think things through before he takes action like I learned to do. Mostly.