Interview with Author Shirley Raye Redmond and a Giveaway!

Welcome to Readers Write to Know! I asked you, my readers, what questions they would ask their favorite authors if given the chance. This week, I am so happy to introduce you to Shirley Raye Redmond. I completely related to Shirley when she talked about how she came up with an idea for a murder in a crowd of people. I do that all the time! And, I’m fascinated by anyone who can write a book longhand. I am so clumsy with pen and paper and have never been able to do that. Please enjoy this interview — and read to the end! Shirley is giving away an ebook of her latest release, Prudence Pursued! Check out the Rafflecopter at the end of the interview to see how you can win a copy!

I grew up on the island of Okinawa, living for those packages of Nancy Drew books and Sweetarts from relatives in the States. We couldn’t buy those treats overseas. I met my husband in college following my baptism ceremony. We have now been married for forty years, have two grown children, two grandsons and one spunky Scottie named Duncan. Besides writing inspirational novels, I have written several children’s books for Random House and Simon & Schuster. My Lewis & Clark: A Prairie Dog for the President was a Children’s Book of the Month Club selection. 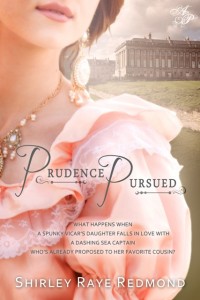 Prudence Pursued is an inspirational Regency. Despite Prudence Pentyre’s best efforts, her cousin Margaret proves reluctant to accept Sir James Brownell’s marriage proposal, and fears being “bovinised” if she undergoes the controversial cowpox vaccination he recommends. And the dashing baronet seems more concerned about the plight of headhunters in Borneo than Margaret’s refusal. Then Prudence suddenly finds herself smitten with the man. What to do? What to do?

What is your preferred method of writing? (computer, pen & paper, etc.):

I like to take notes in a spiral notebook, draft my story on a yellow pad and then type the revised draft on the computer. I love the feel of good pens and the smell of paper!

I was in 7th grade when I made up my mind I wanted to write stories—like Jo March in Little Women. From that point on, I did everything I could think of to prepare myself to be a “real” writer: I kept a journal, I joined the school Journalism Club, and I eventually went on to earn an M.A. in Literature. My first newspaper article was printed when I was still in high school and after that, I was hooked!

Many years ago I was visiting my parents in Arizona. They took me to Tombstone to see a re-enactment of the gunfight at the O.K. Corral. While watching the noisy event—guns blaring and people shouting—I realized how easy it would be to have a REAL gunman hidden on the roof of one of the nearby buildings take a shot at a spectator standing on the sidelines. The unsuspecting victim could be shot dead and no one would really notice, thinking it was part of the “show.” I worked just such a scene into my first novel, STONE OF THE SUN—a romantic suspense. 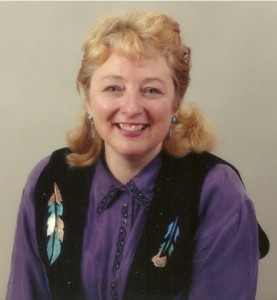 Actually, I wrote and sold many magazine and newspaper articles, essays, and short stories long before I attempted to write a book. I wasn’t sure I had the perseverance to start a novel and see it through to the end. In fact, when I started writing STONE OF THE SUN, a romantic suspense novel, I only wrote 7 chapters before submitting it to an editor. When she expressed interest in seeing the rest of the manuscript, I felt motivated enough to finish the book.

I find that reading nonfiction about people or events related somehow to my novel-in-progress are the best ways for me to combat writer’s block. For instance, when some scene in Prudence Pursued just wouldn’t fall into place, I would sit down with the nonfiction book, The Speckled Monster by Jennifer Lee Carrell (a book about the history of small pox) and read a chapter or two. Soon my imagination would be primed once again and I could return to my creative writing.

Resist the TV temptation. This is a distracting time-waster for most writers. Leave the television off while you’re writing. Resolve to go TV-less for two or three evenings per week, and you will discover more time for writing. Increased productivity will eventually lead to increased sales. Many people have told me they wished they could “find the time” to write. I tell them they have as many hours in a day and as many days in the week as I do. They must “make the time.” Hundreds of popular television series have come and gone that I never saw because I was busy writing.

I loved the Betsy, Tacy, Tib books by Maud Hart Lovelace and the Little Maid historical novels by Alice Turner Curtis. And C.S. Lewis Chronicles of Narnia affected me like no other. He died the same day JFK was assassinated (although I did not realize that at the time), but I was later fortunate enough to meet his former secretary Walter Hooper when visiting Oxford on a literary trip.

I never imagined traveling to Iceland, the “island at the top of the world.” But a few years ago, my sister and I took a sibling trip and enjoyed ourselves immensely. We even rescued a lost puffin, took it back to our hotel room for the night and released it on the black sand beach the following morning.