Topaz Heat can be purchased in e-book format at the following booksellers:

An autographed copy of Topaz Heat can be purchased directly from Hallee by clicking this link.

Topaz Heat is available in audio book at the following retailers:

Enjoy a sample from the Topaz Heat audio book: 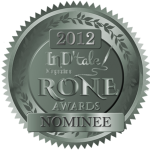 Topaz Heat was a 2012 RONE Award Nominee for Inspirational Novel of the Year.

The very moment Derrick meets Sarah, he realizes he has a reason to live. Sarah sees only an unshaven tough kid covered with tattoos and shuts down every advance.

Amber eyed Sarah Thomas has no memory of her broken young life leading up to the tragic murder of her mother. Her memory begins the morning she wakes in the home of her loving adoptive parents. She doesn’t even know her sisters exist until her 15th year. She learns to love her siblings, but always feels a little out of place in their presence.

A benevolent billionaire offers Derrick DiNunzio a home and an education. Fresh off the streets and rescued from a criminal future, Derrick sheds his old life. He trades his ripped leather jacket for silk suits; dealing drugs for mentoring “at risk” youth; lock picking and back door jobs for the rigors of mountain climbing and hotel management.

Sarah cannot seem to see beyond the past Derrick left behind … until one day she does. When they finally come together, an indictment threatens their future. Now the heat is on. Will Sarah finally set aside her prejudices and open her heart to true love or will the long forgotten past tear them apart forever?

SARAH heard another clang. She quietly set her purse down but held onto the umbrella, holding it just above the handle like a baseball bat. Running lightly on her toes, she crossed the room quickly and stood by the door of the dining room. There were a few more sounds, then the sound of a man whistling that got louder as he got closer.

Taking a deep breath, she raised the umbrella over her head and waited, focused on the door. She let it swing open, watched the figure of the man come out of the dining room, and brought the umbrella down. Hard.

He must have sensed the movement because he ducked and the umbrella hit him across the back of his shoulders. “Ow! Hey!”

In the next second, and utterly without warning, he rolled to the floor and used one of his legs to sweep hers out from under her. She flailed her arms as she landed on her backside, finding herself under his weight. She started struggling, but he threw one of his legs over hers and grabbed her arms in a bone-lock, pinning them up by her head.

She realized her eyes were closed. At the sound of his voice they flew open. Immediate recognition prefaced the heat that rushed her face from total embarrassment. “Derrick? What are you doing here?”

“I was about to ask you the same question.”

She hadn’t seen him in at least five years. No, it was six. He left town right after his mother’s funeral. He’d not been back. She got updates from Maxine or Robin each time they’d seen him in New York. She hadn’t been to New York and hadn’t seen him at all in that space of time. He’d filled out, she thought. His face looked more mature, almost tougher, his shoulders wider.

Derrick was thinking that Sarah hadn’t changed at all. She still looked like a teenager. Her hair had come out of its clip and lay spread out around her head on the carpet, the red highlights caught in the curls, catching the light. She still had the spray of freckles across her nose, and her eyes, behind their glasses, still looked exactly like the color of the richest topaz.

Realizing he was staring, he released her instantly, pushed away, and sat next to her. “What in the world did you hit me with?” He reached behind him and gingerly touched the back of his shoulders, wincing when his hand came away smeared in blood.

The only thing he had on was a pair of sweat pants. “My, um, umbrella.”

He saw it next to her and grabbed it. It was snapped in half. Irritated anger burned through him. “This? You think there’s an intruder and this is what you use to defend yourself?”

She ripped it out of his hands and stood. “It was all I had.”

“It never occurred to you to call security?”

Her cheeks flushed bright red. No, it had not occurred to her. She waved her hand as if to dismiss his last statement. “Let me see,” she said, moving behind him.

She almost withdrew the offer. Then he glared at her before moving to one of the oversized chairs, sitting sideways so she could see his back. The skin across his shoulders was already starting to purple with a bruise, and it looked like something had caught the skin and ripped it. He had a gash about three inches long diagonally across his right shoulder. “Ouch, Derrick. Sorry about that.”

Over his left shoulder, just shy of the bruise, was a tattoo of a dragon, done in brilliant colors – turquoise, fuchsia, purple, bright green. She was surprised that it was there, intrigued. He had done everything to get rid of his past, and she wondered why he still had the tattoo. Before she realized it, her fingers were hovering over it, about to touch it.

He looked at her over his shoulder and glared. She bit her lip and gingerly touched the bruise. “You’ll want to put some ice on it, and you should let me clean and dress the cut.”

She turned to leave. “What are you doing?” he asked.

She was halfway down the hallway before she answered him. “I’ll be right back.” Moving quickly, she went to the master bathroom and pulled open the medicine cabinet, finding the supplies she needed. She slipped the roll of tape and the package of bandages into her scrubs pocket, then pulled a washcloth out of the linen closet and wet it.

When she returned to the front room, he stared at the brown bottle in her hand suspiciously. “What’s that?”

“Uh huh. And what do you think you’re going to do with it?”

With a sigh, she poured some on the cloth and stepped closer. “I’m going to clean the cut.”

He hissed the breath between his teeth and cringed away as the cloth came in contact with his skin. “Ouch. That hurts.”

“Good Lord, Derrick, quit being such a baby.”

He clenched his teeth and swallowed a retort. Then he felt her warm breath blowing on the wound. He imagined her lips puckered as she blew against his fevered skin.

“There, is that better?”

“It’s great. Kind of like a carnival ride but without the cotton candy. Thank you.”

He heard her moving behind him, heard the sound of the cap going back on the bottle. He felt her fingers graze his skin as she placed a bandage over the cut and taped it to his skin. He tried desperately not to react to her touch in any way, to pretend she was some platonic stranger tending his wound. “You need to ice it. I’ll go get some.”

While she was gone, he closed his eyes and took a deep breath, seeking some inner steadiness. Why was she here? She quickly returned and gently set a plastic bag filled with ice across his shoulders, then sat on the couch that angled with the chair so that she faced him.

“You never answered my question,” he said, staring at her with those brown eyes that always made her uncomfortable. “What are you doing here?”

“They’re painting my brownstone today and tomorrow. My furniture is under sheets in the middle of the rooms. Robin never told me that you were going to be here.” She looked down at her shoes. “I really am sorry, Derrick.”

“I guess I forgot to tell her where I was staying. I thought Tony might’ve let her know.” He reached behind him and shifted the bag of ice. “You would have had to park next to my car in the garage though.”

He narrowed his eyes. “From where?”

She gestured at her pastel pink pants, the matching top, and the white jacket with the pastel slashes of color. “Hello? From the hospital.”

“Are you out of your mind?” She opened her mouth to argue with him, but he cut her off. “That’s easily four or five blocks. Downtown. On a Friday night.”

“It’s not like the streets were deserted or anything.”

“What possessed you to walk?”

She bared her teeth. “It might have something to do with the fact that my car wouldn’t start.”

“Why didn’t you call someone?”

She’d had enough. She was really sorry that she’d whacked him with her umbrella, but the truth was she really couldn’t stand the man and never had been able to stomach him. “I’ve been an adult for a long time, Derrick, and I don’t answer to anyone, most especially you. If you’ll excuse me, I’ve had a really long day and I’m going to bed.”

As she brushed by him, his hand came out of nowhere and grabbed her arm. She froze, stared down at him, waiting. “I apologize,” he offered with his most velvet voice.

“I’m not going to fall for the smooth charm, Derrick. Now let me go. I’m tired.”

His jaw clenched as he released her. When he heard the click of her bedroom door shutting, he ripped the ice pack off his back and threw it across the room. He turned and carefully leaned back until his back touched the chair. Then he closed his eyes and sighed.

Six years later. Six years and he was still completely in love with her.