Out of the Blue Bouquet Box Set 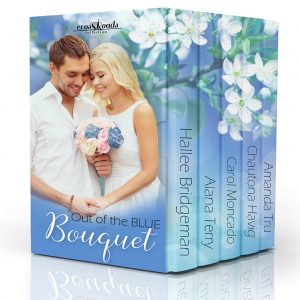 Courting Calla, by Hallee Bridgeman.
Ian knows Calla is the woman God has chosen for him, but Calla is hiding something big. Can Calla trust Ian with her secret, or will she let it destroy any possible hope they may have for a future?

Seoul in Love, by Alana Terry.
Love was lost a long time ago. A chance meeting in Seoul might change all that forever.

A Kærasti for Clari, by Carol Moncado.
Joel Christiansen delivered flowers to the palace and found his life turned upside down.
Clari Sørenson’s job as social media manager for Eyjania’s Queen Mother keeps her busy. An unexpected treasure hunt with a cute guy might be the vacation she needs.
Between clues and a snow storm, they’re drawn to each other. Her grandparents, and even the Queen Mother, have been after her to find a boyfriend, but is Joel the Kærasti for Clari?

Premeditated Serendipity, by Chautona Havig.
When Wayne Farrell hears about his niece’s floral fiasco, it sparks a plan to mix up his own orders in an attempt to play matchmaker. Reid has his reasons for not pursuing Kelsey… yet, and Wayne’s interference only makes an already difficult situation even more awkward. Premeditated Serendipity—because romance sometimes needs a little shove.

Out of the Blue Bouquet, by Amanda Tru.
When Brooke is left in charge of Crossroads Floral, she accidentally sends the flower deliveries to the wrong people. Unfortunately, some of those wrong people include all of the ex-girlfriends of the most eligible bachelor in town. Are Brooke’s mistakes a complete disaster, or can there be something beautiful in an out-of-the-blue bouquet?”

Out of the Blue Bouquet Box Set is available now in e-book format at the following places: