Mission of Mercy can be purchased in e-book format at the following booksellers: 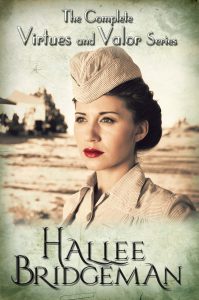 Mission of Mercy is available in paperback as part of the Complete Virtues and Valor Series.

Doctor BETTY GRIMES, miraculously survives the Nazi bombing of her hospital but suffers the loss of her fiancé in the raid. She goes to the countryside to grieve and recuperate and there meets the leader of the Virtues team who recruits the brilliant surgeon.
After months of training, Betty, code-named MERCY, now works in Occupied France as a nurse, where she garners information from patients and passes it to the Allies. Secretly, she tends to injured Resistance operatives, treating gunshots and other wounds that would otherwise draw the attention of the Third Reich.
When Betty is sent to the local prison to see to a prisoner who has taken ill, her shock at finding TEMPERANCE nearly blows her cover. Now Temperance is sick and Mercy needs to get her well enough for the coming rescue operation to succeed.
Can MERCY save TEMPERANCE in time for her rescue, or will her patient succumb to the disease brought on by the torture of the Gestapo?

THE harsh bright light beat down on the back of Betty Grimes’ head. She felt the trickle of sweat start at her temple and slide down her hairline, but she couldn’t free her hands to wipe it away.

“Nurse,” she said, and tilted her temple toward the nurse on her right. Behind her surgical mask, her strong Scottish brogue rolled the r in the word. “If you’d be so kind.”

Before she could contaminate the patient’s open abdomen on the table in front of her, the nurse quickly took a cotton cloth and dabbed at the beads of sweat on Betty’s brow. Betty ignored her. She kept her eyes and hands completely involved in her surgical tasks. She moved efficiently and expediently while she clamped, snipped, and lifted the organ from the patient.

“Lovely work. Barely got it in time, didn’t we?” Doctor Reginald Barclay said, examining the dark appendix Betty set onto the waiting tray.

“Aye. Another hour and it would likely have ruptured,” Betty agreed. “That would have been a fine mess.” She began the preparations to close the patient back up again.

Quietly, so that she nearly didn’t hear him, he said, “Great catch, Bets. And fine work, besides.”  She smiled under her mask at the warmth and pride in his voice as much as his affectionate use of the pet name. She always felt a little giddy whenever her Reggie called her Bets.

Before he could speak again, sirens interrupted them. In a clear and loud voice, he demanded, “How much longer?”

“Jerry may not spare us five minutes,” Barclay announced. He looked at the nurse directly across from him. “Nurse Tatum, get to the bunker. Leave me two orderlies outside of the room to help wheel our patient out after we close him up.”

When the building shook from the shock of a nearby explosion, one of the nurses cried out. Betty looked up, halfway through stitching the incision. “Get yerself into the hallway. Tuck up under the stone archway clear of the windows. I’ll finish up!”

“Doctor –” Nurse Tatum exclaimed, her eyes wide over her mask, “we can’t leave you.”

“You must,” Barclay replied. “Get to safety until the all clear. Your patients need you more than we do. Besides, we’ll be done in a tick.” The nurses left, all the while protesting leaving the two doctors.

“What can I do?” Barclay asked. Betty looked up and met his eyes, feeling her pulse skitter with reaction to the intensity of his gaze. Telling him to leave would be useless, she knew. He wouldn’t leave her side during a bombing attack anymore than she’d leave his. She didn’t have time to argue with him so she simply answered his question.

“Secure his IV then unlock the wheels on the table. Stay sterile if you can manage. We’ll need to move him as soon as I finish the last stitch.”

Doctor Barclay used the toe of his boot to unlock the wheels and unhooked the hanging glass bottle of saline and latex tubing. Her nimble fingers moving as rapidly as possible, Betty finished the last of the sutures. Just as Barclay snipped the thread she held taut, the whole room shook and the power went out. In the pitch black darkness, the smell of cordite filled the room.

Betty felt grit fall from the ceiling and land on her bare arms. She realized she had instinctively leaned over her patient, trying to keep the dust and grit from coming in contact with the freshly stitched wound. Barclay had leaned over as well, but his hands had covered the back of her head, protecting her.

“I’ve always admired your timing,” Barclay observed before releasing her. Seconds later, the light of a torch he’d had in his pocket filled the small area. “Let’s get him into the hall until the lads fix the lecky in here.”

Without stopping to remove her black rubber gloves or her stained surgical clothes, Betty rushed to the foot of the table and let Barclay guide them out of the room.

Sporadic torches lit the hall in an eerie dim light. Betty pulled her mask down off of her face and slipped the gloves off before she touched the arm of Nurse Tatum. “Can you tell me where to get a blanket for this patient?”

“There’s fresh linins in the cupboard in recovery. I’ll get it, Doctor.”

“Cease that haverin‘. Stay here in the loaby where it’s safe. Just tell me how to go.” Taking Barclay’s torch, Betty went back through the surgical area and into the recovery room, where she found clean sheets and blankets. Grabbing as many stacks as she could handle, she turned to go back into the hallway.

The explosion, the solid wall of heat, slammed into her entire body, singing her hair and eyelashes. It knocked her clear off her feet and flung her backward across the room in the space of a single heartbeat. Her last sensation was  a painful ringing in her ears, a terrifying numbness at her back, and fear of the dark as the torch rolled away from her. Something warm clouded her vision moments before a coppery taste filled her mouth. Before she lost consciousness, she realized it was blood. But whose? Her own? Then her eyes slid shut and the world vanished.

When she opened her eyes again, a blinding pain clamped down on her head, overwhelming every other sense. She immediately closed her eyes and felt a hot tear escape the corner of her eye. With her stomach rolling in protest, she gradually opened her eyes again, recognizing the trauma ward in her own hospital. People milled about everywhere, and the noise of the crying, pleading, screaming nearly overwhelmed her.

She pushed herself up onto her elbow. She still wore the bloodied surgical gown. Her hair had come down from its bun, though, and her long red braid brushed against her arm. Tendrils of escaping curls tickled the sides of her cheeks. She raised her hand to brush at them and winced when she came in contact with a painful bump just above the hairline over her left ear. She felt the weight of the bandage on her head without feeling the wound beneath. Had the shrapnel penetrated her pate?

“Nurse, you need to stay still.” She didn’t realize that the woman was speaking to her until she touched her shoulders and tried to gently press her back down onto the bed. “You have a nasty head injury.”

“The doctors are very busy just now. He’ll see you just as soon as he can.”

The nurse raised an eyebrow, as if finding the notion of the petite red headed woman being a doctor impossible to fathom. In response she said, “Nevertheless. Down you go.” After a pause, she added, “Doctor.”

“–is no longer your immediate concern. You’re the patient, now. So let’s get you better first,” the nurse said.

The next time Betty opened her eyes, she found herself  lying in an unfamiliar room with a tall ceiling and elegant wall paper. Beautiful oriental rugs lined the floor. The large bed sat next to a bright window and sunlight bathed her legs and torso. With a slight frown, she slowly and painfully turned her head, surprised to find her mother sitting in a rocking chair next to her, reading a leatherbound Bible.

Immediately, her mother looked up from the book and smiled, relief flooding her green eyes. Her mother set the Bible aside and smiled. “Well it is high time you woke again. I was beginning to wonder if you’d ever wake up.” She spoke in French, as she often did when it was just the two of them.

“On an estate outside of Milton Keyes. They’ve established a care facility here for non-critical patients. Your father was just transfered here to take over as head of hospital operations. This is our room here, in the dowager cottage.”

Her mother leaned forward and laid the back of her hand very gently on Betty’s cheek. “I’m so happy you’re alive. When we heard about the hospital –”

She remembered the bombing, the air raid sirens, the darkness. Denying a very clear memory, daring to hope, she asked, “Reggie?”

The single tear that slid down her mother’s cheek told her everything she needed to know. Reggie – Doctor Reginald Barclay – her soon-to-be husband – had not survived.

Sorrow flooded her chest, choking out anything she might say. Hot tears streamed down her temples and into her hair. If her mother spoke, she couldn’t hear her for the roaring in her ears. She ran her left thumb over her ring finger. She didn’t even have her engagement ring because she’d taken it off to perform the surgery.

Praying that this was all some crazy dream brought on by a concussion, she closed her eyes again and willed herself to go back to sleep so that she could wake up and find her Reggie holding her hand.