The Race is On

Five Tips for Moving with an Autistic Child 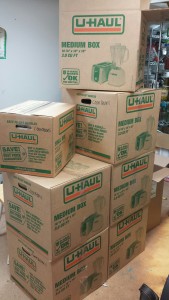 Our eldest son, Scott, cannot handle change. He has to sit in the same chair, on the same side of the car, in the same pew in church. He needs things to be done in the same order and on schedule.

Consequently, when we found out we had to move, we first sought to make the transition as easy as possible for Scott and his younger (7-year-old) brother, Johnathan. As a military brat, I KNOW that people move all the time. For the most part and in most neuro-typical situations, kids bounce back from moves and are just fine within a few days or weeks. In our case, though, we have to deal with a child who would have a major meltdown if unintentionally given the wrong thermos in his lunch box, so we decided to take a proactive approach.

My husband and I sat down and discussed things that might make it less scary, less stressful, and less confusing for him. While, to the outside eye, Scott appears unaware and possibly even a little slow, he is highly intelligent and perceptive with an uncanny power of recall. Knowing this, knowing how his mind works, we developed five objectives:

The end result? We had NO meltdowns from Scott. At all. The entire move happened smoothly and without a hitch (as far as he was concerned — there were plenty of other hitches. See my article in Bookfun Magazine in the February edition.)

Breaking down our objectives, here are our five tips for moving with an autistic child:

(1) BE TRANSPARENT AND OPEN: Be open about what’s happening the first second you can. There might be a gut instinct to hide the move until the last possible moment as if to cushion or protect the child. In constrast, we decided that if Scott had enough time to process and analyze the move then, when it happened, he would be more mentally shored up for it. Springing it on him at the last minute would have removed the opportunity for him to process all of the information. 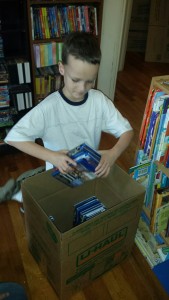 (2) ENGAGE YOUR CHILD IN THE PROCESS OF MOVING: Let your child be an active part of the physical move. Give him boxes to pack or her nic-nacs to wrap. We thought if we made Scott and his brother responsible for packing their room, the change of everything being in boxes wouldn’t feel so sudden. It also gives the child a feeling of control and adds a physical manifestation of the concept of packing up and moving.

(3) VISIT THE AREA: If it’s possible, visit your new area before the move. We scheduled a meeting with the special ed teacher and guidance counselor at the school where we transferred two weeks before we moved. Because we’d  contacted the school even before that, they had already assigned the boys teachers and had them present at the meeting. We took the kids and let them meet the teachers and staff and let them see their new school. In the meantime, it allowed the school a chance to review Scott’s IEP well before he arrived and to ask any questions or address any concerns ahead of time.

My husband drove them around the area and said things like, “Look at that playground. We’ll have to go there when it gets warm. There’s the movie theater, guys. Over there is a doughnut shop like the one we visit on Saturday mornings now.” It let the boys process the differences while assuring them that the things they enjoyed were not gone for good. We also went ahead and signed them up for Tai Kwon Do so that they could meet the instructor and get to know the school. Even though the martial arts school was different than the one they had attended for the last year, by the time their first lesson started, they felt familiar with it.

Because we moved the week of Christmas, the boys did not start their first day of school until two weeks after we moved in. That gave us time to partially settle in before they had to begin their new daily schedule. Every time we drove past their school, we made a big deal about how it was their new school and how neat it looked and remind them about how much we liked it when we visited. We believe it made that first day of school an easier transition. 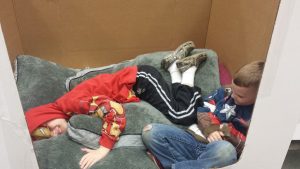 (4) MAKE IT FUN: Even though a move is stressful for the grownups (and we all know it is), children will feed off of your energy. Make a conscious decision to find and focus on the positive. Let yourself feel excited, go exploring, make new traditions and new adventures. Scott and Johnathan each got their own bedrooms in this move. Not only did Scott have to have a new room, he lost the roommate he’d had most of his life. So, my husband and I decided that we would also give them new beds and chose platform beds with desks underneath. Suddenly, we had something to get excited about — “these awesome beds! How cool! Bunk beds AND desks.” Even the first night, we had zero issues with the boys being separated.

We’ve looked at tourism guides, explored our neighborhood, picked out a fishing spot, gone swimming and bowling, found our Saturday morning doughnut shop, and really engaged the boys in the excitement of where we’re living. 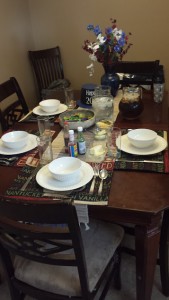 (5) BE CONSISTENT: Try to keep some things as much the same as possible. We have dinner at the same time that we had in our old house. The dinner table is set with the same dishes and everyone sits in their same seats. If I plan on making any changes, then I will make them gradually. Our living room sectional couch is backwards for the room it’s in. No matter which way we turn it, it’s just wrong. However, we’ve decided to wait a few more weeks before we get a new one. Scott still sits in the same spot on the same couch as he did in our old house. The day the couch was set up, he found his spot and settled into it with a smile saying, “Ahh, there’s my spot. Just like the old days.” Clearly, the couch being the same served as a kind of security blanket for him.

During the entire move, the only issue we had was when we went to our old house, returning something to our tenants that the movers had accidentally moved. When Scott went into his old room, he had a total meltdown, because it was DIFFERENT, and I hadn’t thought to prepare him for it. But, that’s it. Typing this one month after the last truck left our house, that single episode constituted the only issue we’ve had with Scott in all of these changes. We believe the move went so smooth because we took an almost aggressive proactive attitude about it.