This week, I finished a Christmas novella that is a second generation Jewel Series titled Christmas Star Sapphire. It follows the story of Madeline Viscolli and Joe Westcott. Here is a snippet from Chapter 5: 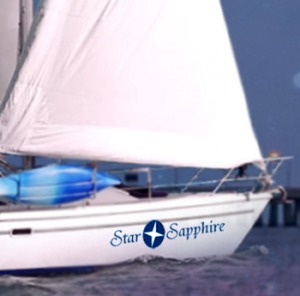 Madeline stared at the sleek white sailboat docked at slip 67. Near the bow and at the stern, the words “Star Sapphire” surrounded a blue oval with a brilliant white starburst in the middle of it. The bright white of the deck of the ship nearly blinded her in the radiant November sunlight. A dark blue canopy stretched over the bridge of the boat, and the line of sleek portholes rising up out of the center of the deck gave evidence to the living area below deck. She could see the sails stored and ready among perfectly coiled ropes.

She knew she’d found the right boat. His bike sat next to a small grill on the dock. Both were chained to the dock railing. What confused her – and had caused her to walk the length of the dock and back once already – was that this was not a Westcott boat. It was an Elohim. Why would a Wescott Marine Wescott live on an Elohim vessel? It did not compute. She frowned, trying to mull that through when she saw the craft shifting in the still water, as if someone moved around inside, and she heard footfalls on stairs.

Her heart gave a little flutter. Maybe this wasn’t a good idea. She had a pretty strong backbone, and typically the opinions of others didn’t overtly affect her opinion of herself. However, an outright rejection from one Joe Westcott after the efforts she put into this little surprise might just be her undoing.

When she saw his head through the porthole, she shifted the sunglasses off of her face and onto the top of her head.

“Ahoy!” She called, loud enough for him to hear her through the gunwale. “Permission to come aboard, Captain?”

Joe emerged onto the main deck with graceful, surefooted motions born of years of practice. He spotted her and, as recognition dawned, his face lit in a blend of surprised smile and pale shock. “Madeline?”

“Maddie.” She corrected and hefted the picnic basket. “I come bearing a holiday feast.”