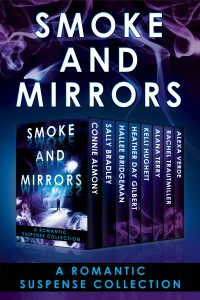 This snippet is from the new suspense novella On the Ropes, which is part of a romantic suspense bundle that I’m doing with my co-host Alana Terry and six other authors! Smoke and Mirrors is currently on preorder for a May 20th release, and is 99 cents for a very limited time! Click here to get it for yourself!

Scanning all the faces, disappointment overtook her nervousness. “He’s not here.”“He’s been here every day for over a month. Of course he’s here.”

They made their way to the line. Ruth checked her watch again. She couldn’t afford to be late for rounds. She may have to skip coffee this morning.

At the sound of his voice, her heart lurched in her chest. Turning, she spied Victor Kovalev standing behind her in the line. He must have entered the shop right behind her. He wasn’t much taller than her five-seven, with a lean build and dark hair that almost curled. Normally, she found herself getting lost in his rich brown eyes, but today, the purpling bruise and swollen left eye made her gasp. “What happened?”

“Wha—?” He stopped mid-word and gingerly touched his upper cheek. She could see the swollen bruising on his knuckles. “Oh, that. I had a fight last night.”

“You got into a fight?” Esther asked, frowning.

His eyebrows knit in a confused look, then he pulled the sports section from The Times out of his bag. On the front page, a color photo of a boxer in royal blue and bright red shorts punched another boxer wearing yellow and black shorts. Upon closer examination, she recognized Victor as the boxer in blue and red. “This is you?”

“It is.” He smiled a closed lip smile and took the paper back from her as a faint tinge of red covered his cheeks. “I thought you knew.”

“I don’t know much about boxing.” Despite social expectancies and personal space, despite the nervousness at even speaking to him this morning, the doctor in her took over and she took his chin in one hand and carefully but skillfully palpitated the area around his eye with her fingers. “Has a doctor seen this?”

He stood perfectly still while she examined him but grinned at her with a smile that had started to bare straight white teeth. His smile made her heart skip a beat. “Yes, ma’am. She just did.”

Flustered, she stepped away and gave her order at the counter. As soon as Esther and Victor ordered, they joined the throng waiting for their drinks. Esther gently nudged her and nodded toward Victor. Before she could talk herself out of it, she blurted, “Would you like to go to church with me tonight?”

They always met at this coffee shop, the one where they originally ran into each other, every morning at 6:30. She realized after the third meeting that he intentionally came to meet her, and very quickly started to look forward to it. He’d asked her out daily for about six weeks. Because her residency schedule proved so grueling, she had turned him down, but she always found time for church, and she so wanted to get to know him better.

“Church?” His smile started to fade and his eyebrows lowered suspiciously.

Her stomach fell. He looked so taken aback, so confused. What had she done? “You have an objection to church?”

“I don’t know.” Instantly, his face transformed back into a grin that lit up the whole room. “Why don’t we find out? What time?”

Now it’s your turn! Just link your Christian Fiction Friday in the comments! Here are the rules: