An Interview with Rose McCauley and a Giveaway!

The exciting Virtues and Valor serialized story continues with book 3! 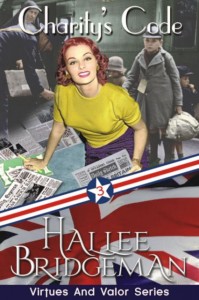 Continuing the Virtues and Valor series by Hallee Bridgeman. Seven serialized novellas, each inspired by real people and actual events, reveal the incredible story of amazing heroines facing the ultimate test of bravery. Book 3, Charity’s Code, is now available at the following locations: