Buy Ebooks Directly from Me!

I’m excited to launch a direct ebook sales availability on my website. If you go to “home” on this website and click any book cover, it will take you to that book’s page. From there, you can click any retailer button you choose to purchase the ebook or paperback. But, if you click the Paypal button, it will take you to a place where you can download the file in your preferred format (including a Kindle .mobi) without having to go through a retailer.

I’m so excited about this!

Here is a sample of the page for Christmas Star Sapphire: 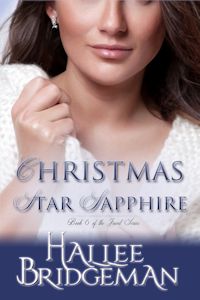 MADELINE VISCOLLI meets JOE WESTCOTT during a campus ministry meeting as she begins graduate school in Alabama. Joe’s personal rule of not dating students starts to fade until he discovers Madeline’s destiny lay in running her father’s massive corporation. After rejecting wealth and all its trappings, Joe struggles against the attraction he feels for Madeline. Madeline knows she loves Joe, but is not willing to throw away her destiny of taking over the helm of Viscolli Enterprises.

A Christmas Eve funeral washes all Joe’s plans away. Will their love succomb to the rising tide caused by their differences in lifestyles, or will raging seas calm and allow them to sail off into the sunset?

For $2.99, you can securely purchase the ebook directly from Hallee. Click the Paypal button:

Find Christmas Star Sapphire at any of these online booksellers:

To get an autographed copy of Christmas Star Sapphire, order directly from Hallee at this link.

Christmas Star Sapphire can be purchased in paperback at the following places:

MADELINE VISCOLLI finds herself on the Gulf shores of Alabama, where she takes part in a graduate program to earn her MBA. On her first day there, she meets JOE WESTCOTT, team leader for a campus ministry. Despite a mutual attraction, Joe’s personal rule of no romance with any student keeps any kind of deep relationship from developing.

Joe has no desire to have a relationship with anyone, ever, anyway. He left a life of luxury and his family’s business behind to live alone on a sailboat and serve in ministry. Then Madeline walks into the auditorium the week school starts and Joe suspects his personal rules might not apply to this graduate student.

That is, until he discovers Madeline is one of the Viscollis, and that her destiny lay in running her father’s massive corporation. Having rejected wealth and all its trappings since childhood, Joe finds himself falling for the vivacious sapphire-eyed beauty. Madeline knows she loves Joe, but is not willing to throw away her destiny of taking over at the helm of Viscolli Enterprises.

A Christmas Eve funeral washes all Joe’s plans away. Will their love succumb to the rising tide caused by their differences in lifestyles, or will raging seas calm and allow them to sail off into the sunset?

When Madeline Viscolli arrived a few minutes late at the small auditorium on the east side of the University’s campus, she expected to see a few dozen people already there, but found only one lone man sitting on the floor with his back against the base of the raised stage. Frowning, she glanced at her watch. Surely on the campus of one of the largest universities in Alabama, the Cru program had more than one person involved.

Once called Campus Crusade for Christ, Cru served on college campuses all over the world. Cru provided students with worship and fellowship opportunities in a body of believers – a family away from family. While an undergraduate at the University of Florida, she’d spent hours and hours with her Cru family, and grew into a deeper relationship with God than she’d ever even thought possible. She’d gone on four mission trips spanning a total of eight different countries, volunteered in summer programs, and had developed friendships she knew she would treasure for the rest of her life. Now, pursuing a Master’s degree in business, she found herself on the coast of Alabama hoping to integrate into a new Cru group.

Never shy, Madeline walked into the nearly empty building and marched straight down the aisle. The man looked up from his book and smiled at her. He had light red hair and a goatee that looked nearly blond. As she drew closer, she recognized the logo on his T-shirt from her favorite seafood restaurant in Key West.

“Hello,” he greeted, setting his book aside and standing. Even though Madeline stood just two inches shy of six-feet, she had to look up at him. He smiled warmly and looked directly into her rich blue eyes as he held out his hand. “Joseph Westcott – Pastor Joe – though most people just go with Joe.”

“Madeline Viscolli.” She shook his hand. Even though he kept his grip purposefully light she felt the hard calluses on his palms. Her father, an avid rower, had similar calluses. So, he was a pastor. Why was no one else here, then? “Am I in the right place for the Cru meeting?”

“You sure are,” he answered, his green eyes shining with amusement, “and you’ll be right on time in about fifty-eight minutes.”

“Yes. It does.” He raised an eyebrow. “Still on east coast time?”

Why would he be asking…? Feeling her face flood with heat, she realized. “Of course. We’re in Central Time.”

With a friendly laugh, he gestured toward a cooler that sat on the floor near the stage. “Takes a little while to lose that hour. Water?”

“That would be lovely, thank you.” Accepting the ice cold bottle from him she slipped her bag off of her shoulder and sat in one of the comfortable auditorium seats. “I didn’t get in until just now. Came straight from the airport. I actually scheduled my arrival to coordinate with the meeting.”

“Where you comin’ from, Miss Viscolli?” While he casually dropped the verb much like a native, his accent didn’t sound Deep South to her ear. It made his manner of speaking interesting. His warm smile made it even more interesting.

“I graduated last spring from the University of Florida.” She took a long pull from the bottle, not realizing how thirsty she felt until the icy water hit her dry throat. “I’m going to be getting my Master’s here.”

“Gators? Let me think.” He hopped up onto the stage, facing her. He wore leather deck shoes with no socks and, despite the red hair, had a rather dark tan. “Chris Wilson still the Cru director there?”

Picturing the dark brown face and laughing light brown eyes of Pastor Chris, Madeline smiled. “He is. His wife just had their second baby.”

“He showed me pictures at our annual conference.” He gestured at his T-shirt. “I usually spend a good bit of the summer in Florida myself.”

The calluses on his palm and the tan lines despite his fair complexion had her guessing his hobby. “Do you sail?”

His eyebrows rose in surprise. “How did you know that?”

Madeline shrugged. “Lots of little clues, I guess.” Plus, she could see him, in her mind’s eye, on the deck of a little catamaran, skimming the turquoise waves off the Florida Keys. Her family had a home down there, and she had spent her childhood living in either Boston or southern Florida. Sailboats were just a part of what she considered normal in life.

“Quite observant, Miss Viscolli.” He pronounced her name perfectly, long o sound and all. He looked at his watch. “We have some time before the meeting. If anyone else had their times mixed up, they would have been here by now. Honestly, you should probably eat something now if you’re still on Eastern Time. You’ll be starving in a few hours. Want to grab a coffee and a snack or something?”

“Actually, I think I’ll skip tonight and go find my apartment.” She stood, almost instantly regretting turning down the offer. She suddenly realized she might enjoy getting to know Mr. Westcott better. “I thought I’d have more energy. I just got in from spending the last several weeks in England with my brother and his wife, and I’m a bit jet lagged.” Waving a hand around the room, she added, “Hence the mix-up with the time.” She picked up her bag and slipped the strap over her shoulder. “I look forward to the next few years, Pastor Joe Westcott. Cru has been a major focus of my life since my first day at college. I’m praying I’ll be able to develop the kind of friendships I had in Florida.”

He scooted off of the stage and held out his hand. Without hesitation, she placed her hand in his again.

“It was truly a pleasure to meet you, Madeline Viscolli. I look forward to seeing you again very soon and I’ll be sure to email Chris Wilson and let him know I met you.” He held her hand throughout this tiny little monologue, then gave her fingers a gentle squeeze before he released her grasp. Did he hold her hand a heartbeat longer than necessary, or was that just her jet lagged brain slowing everything down?