Interview with Author Tanya Eavenson and a Giveaway!

Autism: Things Are Not Always As They Appear

I recently joined my son, Scott, for lunch at his school. I met his class in the hallway walking to the lunch room, and walked with them into the room. Instead of sitting at the table that the rest of his class gradually filled up, he took me to the back of the lunch room. “I like to sit in the detention corner,” he explained.

He was THRILLED that I came. He was almost manic about my presence, and jibber-jabbered all the way into the lunch room. But, once we were there, he didn’t say another word. He just started eating his lunch, tackling one food item at a time. Occasionally, he looked at me and smiled while he reached over and pet my face, but didn’t really talk. Lunch time in the cafeteria is for eating – not for talking.

I surveyed the room, people watching as I tend to do. I took this picture, understanding the emotional reaction people would have to it. When I showed it to my mom, she did the same thing I imagine most of you are doing – gasping and saying, “That’s so sad.” 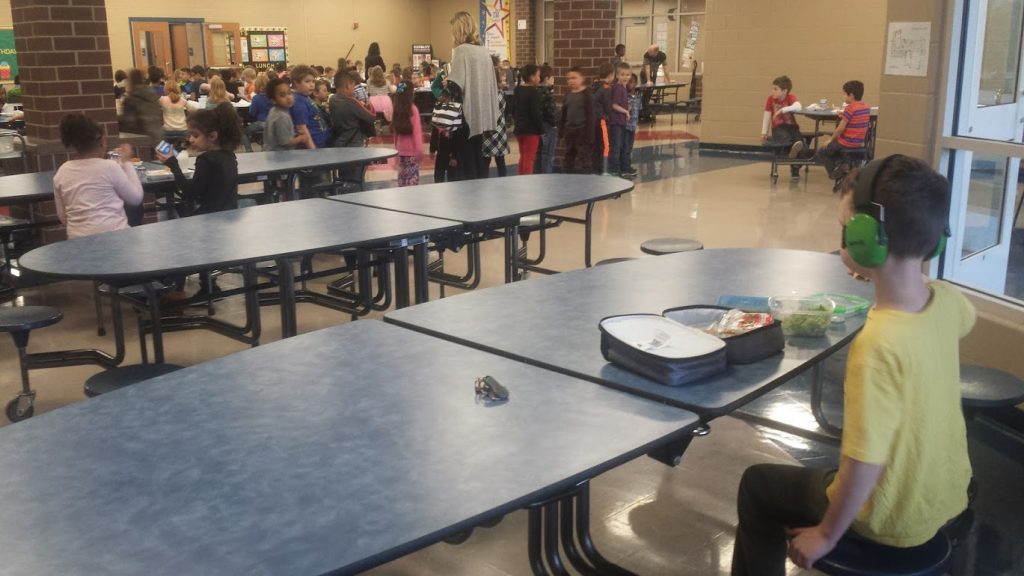 Only, it’s not. Not really.

Scott chooses to isolate himself in the lunch room. His class is way across the cafeteria from where Scott is sitting, at the first table in the room. He doesn’t want to sit there – next to kids who are playing or talking or not eating. Lunch time is for eating.

He didn’t sit down and get rejected by peers. He didn’t ask to sit somewhere and get told to go away. He isolated himself so that he could get down to the business at hand – to eat without distraction.

As normal people, we tend to want to apply normal emotions to those on the autistic spectrum. The fact is, they don’t necessarily have normal emotional reactions, normal thought processes, or normal perceptions. They are so very different in the way they think and perceive situations. To Scott, in the loud, distracting, room filled with way too much visual stimulation and an abundance of conflicting smells, sitting way back in the “detention corner” (likely a name he applied to it taken from one of the middle-school books he reads) is way LESS stressful than sitting with his class. He has no need for social interaction with peers during a meal time. He has a need to eat.

I personally appreciate the school allowing him the opportunity to isolate himself and cope with the environment the best way he can. I know in some schools, a strict “sit with your class” rule would apply. Scott’s in an environment filled with people who respect his autism and do their best to accommodate it. We are so thankful to God for the teachers and staff because of it.

We are visual people, and in a rapidly moving world, we tend to rely on pictures to tell a thousand words — especially those pictures intentionally designed to generate an emotional response. Sometimes, though, things aren’t as they appear at first glance. A picture like this could speak to the hearts of a world filled with loving and generous people,  generating a viral movement to bring that poor boy with the green noise-canceling headphones friends for lunch so that he can feel loved and accepted like the rest of us normal people.

Instead, we know he is loved and accepted and therefore is allowed to sit alone at lunch. It’s not always — let me rephrase that. It’s rarely ever that I’m able to take in the world the same way Scott does.  This one afternoon, though, as I surveyed the room and took the picture, I was able to see the world through his eyes and – for just a moment – get it.
.