Autism, Girls Can Be Mean, and Angry Birds

I’ve always wanted to train my kids to entertain themselves away from electronics. I have no objection to electronics. How am I supposed to see the brilliant David Suchet as Hercule Poirot, or Skype with my brother in Australia, or even type this blog post without electronics? But, I also know how to look out the window of a car and enjoy the scenery, or pick up a book, or make eye contact when having a conversation — those are the kinds of things we think of when we say we want kids to not rely on electronics for entertainment. 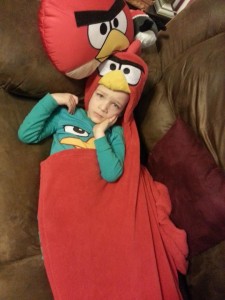 I remember the first time I saw anything about Angry Birds. Scott, who is nearly 10, was about 4. He saw a big display of stuffed birds and pigs in a store at Christmas time and wanted one. A few months later, someone referenced something about Angry Birds, and I remembered the display. That’s when I put them together in my head that it was a game.

Scott, though,  had become obsessed with playing it. He asked me several times for the next year or so to put it on my phone. I had no idea how he even knew about it, because he had no means nor method by which to know about it, yet he knew everything about it.

One day, we were out of town at a friend’s house. Now, Scott, socially, is WAYYY younger than nearly 10. At this time, he was probably 6 years old, but socially, maybe 3. MAYBE. That’s probably giving him a little extra credit for his social abilities. So, here’s my socially inept 6-year-old, and there was a little girl his age at this house who had 2 friends over playing with her.

You may not see this, but in my experience, girls can be mean. They have a social pecking-order dynamic even when they’re just 6. And Scott, who only wants to play the way he understands it (and the way his little brother knows how to play) kept trying to engage this girl and her friends. But, he’s clearly different and clearly overly gullible and kind of shark bait in a social dynamic kind of way. Finally, they sort of ganged up on him and in the little girls are mean way, began to tease him viciously, when all the while he innocently thought they were playing his game his way. 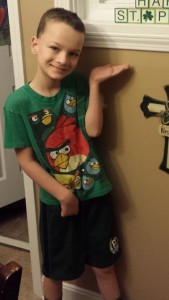 I couldn’t take it for more than a second. As soon as I realized what was going on, I pulled out my phone and loaded Angry Birds onto it. Judge me, but Scott didn’t have a clue these girls were being so mean. He doesn’t have the kind of filters that tell him that someone isn’t sincere. When I told him to quit letting them do whatever it was (I can’t remember specific details), he insisted they were his friends and were being nice. So, I handed him my phone.

Immediately, the girls ceased to be important. He had his long coveted Angry Birds game! In no time, these girls were all sitting around him, helping him play. I hovered, as I tend to do with him in groups, and made sure their interest was sincere, and it was. Soon, social pecking-orders designed as only little girls could design them faded away and they were all playing Angry Birds together, both with the phone and with pillows and blocks, and getting along. 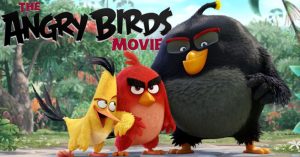 So, while I tend to want my kids to entertain themselves away from electronics, I do have kind of a soft spot in my heart for Angry Birds. Even though PluggedIn’s review has the following sentence in the summary:

But what more were we expecting from a cartoon based on a phone app that shoots miffed birds at pigs?

…my kids have been counting down the days to release day, and I’ve committed to a 7 o’clock “Mommy Date” that will involve Angry Birds Happy Meals followed by a trip to the theater.

I’m excited and I hope it’s as much fun as we’re all convinced it will be.