The Beauty of the Brown Eyed Susan

Interview with Author Sara Foust and a New Release Giveaway!

I look back on our son Scott’s childhood and see where I made an assumption about autism that a lot of people mistakenly make.

Throughout his toddler years and young childhood, Scott never sought out other children. In social situations, he would find a quiet corner away from a crowd of kids and would play on his own. Until third grade, he couldn’t even differentiate between “he” and “she” among the crowd, and never knew anyone’s name. It was easy to generate an assumption that he didn’t want to cultivate friendships, that he didn’t care. In fact, those are the words I used, “He doesn’t care about other kids or having friends.”

Over the course of the last couple of years, I’ve realized how wrong I was. Right after we moved to Fort Knox, another family moved in with three children all around the ages as Scott and his brother Jeb. Scott connected with them in a way we’d never seen nor expected, and soon developed close friendships with them. They accepted him without reservation, let him set the tone for their interactions, and still sought him out to play or hang out. This was the first time in his life that he had friends like that. He’s had a school friend before, another child with autism, but their interactions were separate but together — coming together for play dates where they each went into their own corners to play. Not a lot of one-on-one interaction, just an understanding of acceptance. With these friends, though, it was true, full-blown, sharing thoughts and ideas and fears and imaginations. He completely blossomed and bloomed under their friendship and learned so much about interacting outside of the circle of just him and Jeb. 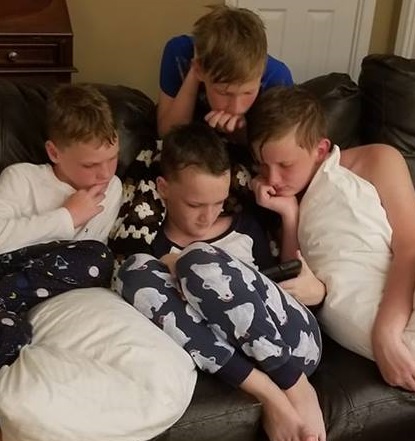 They moved right after school got out and he admitted not long after that he was lonely, and that he wished he had another friend.

Recently, he wanted to go to the mall to go to a store called Hot Topic. For those of you who don’t have children of a certain age who might not know, Hot Topic is the “cool” store – especially for us nerdy centric families. It has fun paraphernalia from all sorts of pop culture and music. He’d researched this store, what they carried, and the item that he wanted to purchase that was a “Hot Topic Exclusive”. He saved his money until he had enough, then we made our way to the mall one day in early summer.

Scott has serious sensory issues, and one that affects him in the extreme is hearing. He often wears noise-canceling headphones in loud areas. My husband and I have a pair in each of our vehicles, and Scott carries a pair in his backpack at school. We walked into the mall this day, and I held the headphones out to him, knowing how loud they play the music in Hot Topic.

“Really?” I didn’t fight. It’s his decision whether he wears them or not. I just put them in my purse so that they’d be there in case he needed them.

“Really. Besides, I want the people at Hot Topic to think I fit in.”

That took my breath away. All of this assumption that he doesn’t care, that social situations are meaningless to him completely flew out the window.

The problem is not a lack of desire. The problem is a different functioning brain that takes all of the social cues and nuances and skews them so that they’re not understood the way that you or I or anyone else with a neurotypical brain can read, understand, and respond to properly. It’s just easier for him to go into his own corner to play than having to deal with trying to read all of those signs and signals.

We’ve noticed, though, that as he gets older, he is learning how to seek out connections with people. If he sees a child his age with a T-shirt on with a recognized and loved character from a video game or movie, he’ll go out of his way to talk to that child. In waiting rooms, if someone is playing a game he recognizes, he’ll engage that kid in conversation about the game.

There was a time when I didn’t expect him to really have a close relationship with anyone other than Jeb. Now I know how terribly wrong I was. He just turned 12 and starts middle school in 3 weeks. I know that there’s someone else walking into that school that likes the same things, understands the subculture Scott loves the same way he does, and will be his friend. Whether he can filter through the noise and lights and activity around him enough to see that person remains to be seen.