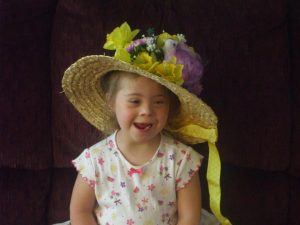 My sister-in-law found out during her pregnancy that the baby she carried had Down’s Syndrome. By the time our niece, Annalise, was born, she and her husband had several weeks to prepare, plan, and equip themselves as they began the journey of parenting their daughter. They had occupational therapists when she was just an infant, a team of doctors, and the combined knowledge of decades of medical research to aid and assist them in their process.

With our son Scott, rather than an ultrasound that led to more testing, we had years of symptoms that were then compiled and (at times arbitrarily) analyzed over the course of months before we finally received a diagnosis: Autism Spectrum Disorder and ADHD. The original diagnosis read:

Autism Spectrum Disorder manifested by issues in reading and auditory comprehension,  issues in interpersonal relationships, and issues in sensory processing with an above average raw intelligence

We didn’t have months or even weeks to prepare ourselves with how to go about parenting this child with a brain that doesn’t operate on the same level as ours. We spent a couple of years just playing catch-up in how we ought to parent with the goal of teaching him coping skills to equip him into adolescence and adulthood after years of not knowing exactly what to do or how to do it.

In fact, we still don’t receive any kind of guidance or education from anyone other than ourselves. As we received the “official” diagnosis (when Scott was 9), we moved and had to be placed on a waiting list. Seven months later, we finally have our first appointment (in July) at an autism clinic local to us, and we will begin the journey of learning all that we don’t already know. 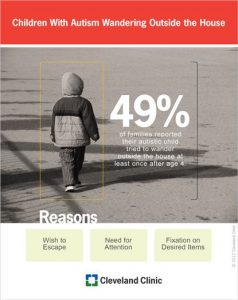 I remember that the first time I saw an autism infographic claiming that 49% of children with autism have wandered outside of the home, I started crying. I couldn’t believe I didn’t know that Scott’s tendency to wander away is actually a result of his autism. I thought I simply was a distracted, bad mother who had lost her young child one too many times in crowded, public places. By the time he was 3, I didn’t go anywhere like parades or public parks or public swimming pools, because I knew I would ‘lose’ him. If I couldn’t have one of my boys (Scott’s brother is almost 2 years younger than him) in a stroller while wearing the other one in a baby carrier, I didn’t go.  I kept our front door latched at all times, because if I couldn’t find him in the house and the front door was still latched, I knew he was either somewhere I hadn’t yet looked or outside in the fenced in back yard. 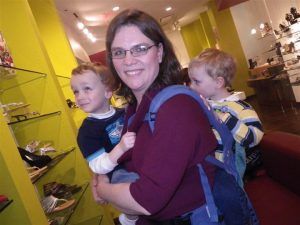 I feel sometimes like we’re still having to scramble to catch up with new information and how to how to apply it to our son.

That said, I think it works both ways, too. If we had known Scott had autism going into his learning how to eat table food, for instance, it probably would have absolutely altered the way we dealt with eating at our table. Our rule is basically, if it’s on your plate, you must taste it. If you don’t like it, have more salad and eat an apple. I cook whole food with lots of flavor and spices and a diverse menu.

Because we tend to take such a firm stance with food, even when Scott’s issues about food touching or textures try to interfere with his willingness to taste something, his learned coping skills come into play and he gives it a go. As such, he has a well-rounded palate, a healthy appetite, and will taste anything. He knows how to order from a menu, knows how to dish up a salad at a salad bar, and looks forward to dessert.

It’s possible that our attempts at parenting him like a neuro-typical child for the first half of his life really helped set him up for more success in his future than he might have had. However, I can’t help but feel like we would have been stronger and more effective parents had we been better prepared and more equipped. I think it would have been nice to have an ultrasound then further testing, to then be handed a packet of information and resources that would aid us going into his life rather than spending the first 5 years in dismay over symptoms and the next 5 years after that clambering to catch-up with research and education.

It would have been nice to know that an autistic child has a tendency to wander away, so it’s best to keep that in mind when child-proofing your house or taking him out in public long before the frantic search of a Chicago mall that resulted in the longest 7 minutes of my life.

This whole journey at times seems to be this experiment in right or wrong parenting choices. We face so many issues with the question, “Is it disability or is it discipline?” Because how we handle situations will depend on that answer. Unfortunately, so often, the answer is, “I’m not sure,” which means we just have to close our eyes, pray, and step forward and parent the best we know how.