Adventures in Moving and God’s Grace

Yesterday was the two-year anniversary of our move to Fort Knox. As I’ve said in social media for the last couple of years, this move was so good for us and we love living here so much.

In the course of looking for a blog post I’d started writing for Faithful.live last week, I stumbled across this article I’d written but never published. As today is the two-year anniversary of all of this adventure, I thought it would be a good time to tell you this story. 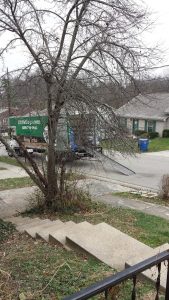 Over Christmas week 2015, our family moved across state. During the morning of the major household goods move, one of the movers said to me, “Moving is one of the most stressful things you can do. We’re here to make it easier.”

I have to agree with him. Moving our daughter into an apartment near her university, pulling a second grader and an autistic third grader out of an amazing school, and moving during the week of Christmas WAS quite stressful. The move itself would have been stressful on its own, but we had quite an adventure through the whole thing. Yet, through it all, we were able to completely see God’s hand helping us through every situation.

In the spirit of “Truth is Stranger Than Fiction,” here is a story that sounds like it came out of one of my books: 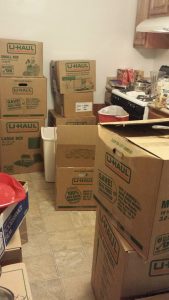 Movers moved the household on Friday, December 18th. The movers got to our house at 8:30 in the morning and left the new house at 9PM the same night. We spent the night in the new house and the next morning, drove the 2 hours back to the old house to finish moving the odds and ends that didn’t go with the big stuff. We ended up with more odds and ends than would fit in my husband Gregg’s truck, so we borrowed his cousin’s trailer and Suburban. We had several friends meet us at the old house and we loaded the trailer, cleaned the house, and signed the lease agreement with the new tenants. Then we hooked the Suburban up to the trailer and discovered the lights didn’t work.

In Kentucky, you don’t need trailer lights in the daytime. It was currently 4PM. We were going to be racing against the sun to get to our new home before the sun set. We would be lucky, actually, if we made it in time. It was important to get there on time, because we had to go through security at Fort Knox – so, no working lights would keep us from being able to get home.

About 40 minutes into the drive, we kept hearing odd noises. Gregg would pull over and we’d walk all around the Suburban and trailer and find nothing. Every time we stopped, our arrival time at home became later and later. After getting back up to speed for what had to be the fourth time, one of the tires on the Suburban shredded. Gregg managed to get us to an exit and to a gas station. How the tire, now almost entirely just steel, stayed inflated was truly miraculous.

At the gas station, we tried to change the tire, but there was no moving the rusty bolts. Even standing on the tire rod, they wouldn’t budge. By now, it was after 5:30PM on the Saturday before Christmas. The attendant at the gas station called a semi-wrecker service and caught the owner before he left for the day. Praying the entire way, we drove the 2 miles to his shop (on the tire that was still miraculously inflated). He changed the tire, then spent about an hour hard-wiring the lights to the suburban so that they would work.
Now, with a working truck and a lighted trailer, the stress of getting home before dark went away. Which was good, since it was now fully dark.

We stopped at a Cracker Barrel at the next exit and ate dinner, decompressing after the stress of the last 36 or so hours. Around 8PM, we loaded our two little kids back into the Suburban and started on the final hour-long journey home. I noticed my cell phone battery was at about 10%. My charger was in my car, which was parked at Gregg’s cousin’s house in exchange for the Suburban. Gregg had inadvertently left his phone at home that morning.

We got back on the highway, and about a mile later, the transmission went completely out on the Suburban. Gregg checked and the transmission fluid was totally dry. So, he thought he could maybe walk to the exit we’d just left and buy some fluid, hoping it would fix things enough to get home. He left me in the Suburban with the boys and a nearly dead cell phone and started walking back the way we’d come. I put my phone in airplane mode to conserve as much power as possible and waited in the dark. About five minutes later, a car with yellow flashing lights pulled up behind the trailer. Anxious, I took my phone out of airplane mode and prepared to dial it when Gregg walked up to my window.

“This man is emergency roadside assistance for an insurance company. [Side bar: come to find out, for OUR insurance company.] His wife saw me walking and called him to come pick me up. He’s a pastor and she is a fan of your books. He’s going to drive me to the service station and I’ll get transmission fluid. We’ll be back in a few minutes.”

Wow. Talk about God stepping in.

Gregg asked me to get into the trailer and get one of my books out for this man’s wife while they were gone. I just happened to have a book that a friend who’d helped me pack had pulled out to buy as a Christmas gift for someone but then never did. Perfect! I didn’t even have to dig in a box. So, I signed it to her. When the men came back, Gregg put the fluid in the Suburban, but it did not help. The transmission was totally gone. It was about 24 degrees outside.

Now we had to decide what to do. I had very little phone life left. Praying about it, we decided to call our daughter, Kaylee. She was an hour away and still at her retail job at the mall. She would get off work at 11:00, then come pick us up and take us to the new house. In the meantime, the pastor-emergency-roadside-assistance-man took us back to his home, where his wife greeted us with coffee for us and snacks for the boys. The trailer and Suburban were left on the side of the road. 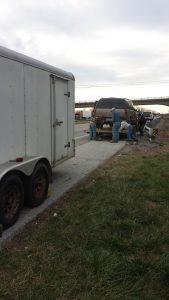 Around 12:30 in the morning, Kaylee arrived. At 2:00, we pulled into the driveway of our new home. Kaylee, bless her heart, had to leave by 8:30 to make it back home in time to be at work by 11:00. We packed up fully charged cell phones and met up with Gregg’s cousin and his crew, who brought a car carrier to take the Suburban back, and brought us another truck with which to haul the trailer. We got to our new home around 6PM Sunday night and just left the trailer there.

Monday morning, I unloaded the trailer, loaded the boys BACK up, and returned the truck and trailer to the farm, collected my car, and completed the 4-hour round trip around 5PM Monday night. I promised the boys we wouldn’t have to do that drive for a long time, not knowing that Kaylee would get into a fender-bender in the mall parking lot coming out of work the next night and that we’d need to drive back to Lexington on Christmas Eve to get her, bring her home for Christmas, and let her take a car home with her.

It’s hard to believe all of that happened just 2 years ago. But, through it, we saw God’s guidance, His hand, and His provision. What should have been enough stress to knock a grown man on his feet ended up being an opportunity to fellowship with new friends in their home. Through the trials of the circumstances, we received a major blessing and gave others a chance to minister to US, something that is usually what WE do for others.
I’m thankful for God’s grace and His love.