Day 4: Your parents or siblings 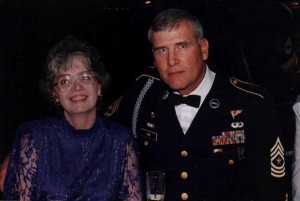 My parents are pretty awesome people.  They were high school sweethearts and were married the weekend before my mom’s 20th birthday in 1968.  My dad was a career Army soldier and my mom was an Army wife who was such a natural at it that she made the life seem easy and effortless.  I remember when my husband was in Afghanistan in 2002, I called my mom and said, “This isn’t easy.  How did you make it look easy?”

My dad retired in 1999 and then worked in a very tradition-oriented and respected boys’ military boarding school in Wisconsin.  During his career there, he was able to lead, mentor, and impact the lives of hundreds of boys.  I love seeing him interact with them in social media and seeing the love and respect they hold for him.

Dad is retired fully now and, after living in all four corners of the country and various places in between in their long career, they made their retirement home in a small town in the mountains of West Virginia.  Visiting them and spending time with them is one of my favorite things to do.

My mom and I share the same taste in movies – preferring action/car chases/adventure over, well, almost anything that would be considered a good movie by the critics.  She used to be an avid romance novel reader, then an avid mystery reader, and is now an avid crossword puzzle buff.  She’s brilliant and gets bored with normal crosswords and instead has books from early 20th century New York Times Sunday puzzles — meaning she has to learn the vernacular of that time period in order to do the puzzle.

My dad is a Bible scholar.  When I was in my early 20’s and he was in his late 40’s, he wrote me a letter that said, “Start studying your Bible now.  Don’t wait until you’re older like me.  I study and study as hard as I can, and I learn something new every day.  I fear that even if I lived to be 100, there isn’t enough time left on earth for me to learn everything I can learn from the Bible.”

Both of my parents are very active in their church, heading classes, committees, singing in the choir, and serving as leadership and ushers.  I love their hearts for serving God. 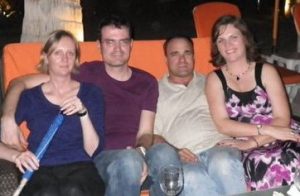 My older brother is just 16 months older than me.  He’s uber smart.  I always loved when we had to move to a new school, because for one year, in the eyes of the teachers, I wasn’t “Jim’s sister” and therefore didn’t have quite the expectations placed on me.  He majored in film at USC (and was there during the Rodney King riots way back in the early 90’s — if that doesn’t age us — heh.)  He made his home in New York City for about 20 years where he did everything from DJ hip-hop music (which he still does often) to working as a produce expert at Whole Foods  before relocating to Sydney, Australia with his Aussie wife.  Jim and his wife work in Abu Dhabi for part of the year, and Sydney for the other part, working with the Abu Dhabi and Sydney film festivals.  Gregg and I had a chance to visit them in Abu Dhabi and had a wonderful time visiting with them.  My brother is a freelance writer, and blogs about being an American in Austria at Outernational and about all things music and movies at Feral Kid.  My brother Jim is a good man with a good heart and a love and respect for all life that just seems almost out of place in this crazy, selfish world in which we live. 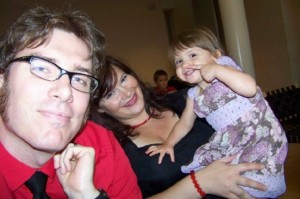 My younger brother is almost four years younger than me.  Ty is a brilliant artist who, even as a child, spent his summers designing comic book characters and drawing them from dozens of different ways from dozens of different angles, over and over again, and was commissioned to illustrate a series of children’s books when he was just in high school.  He studied art at Clark University in Worchester, MA, and left the Boston area after college with a group of friends to make his home in Chicago.  He has many of our father’s leadership traits, and is rising quickly through the ranks of a major natural foods grocery chain, while he continues in his comic book ventures by night.  He and his Chicago-native wife have a daughter who falls, age-wise, almost exactly in between Scott and Johnathan.  In fact, they found out they were pregnant when I was in the hospital having Scott.  One of my favorite things my brother does is to create art “collaborations” with his daughter, letting her draw while he colors in or vice-versa.  It is so much fun to see him encouraging her embracing of his passion in life. 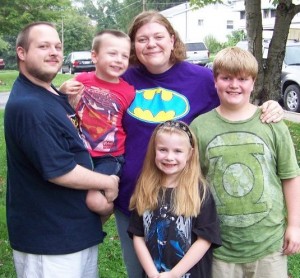 My sister is five years younger than me.  Misty is absolutely brilliant and has always been a very strong personality with natural leadership skills inherited from our dad.  She knew very early on in life that she wanted to be a journalist, and worked on high school and then college newspapers until she graduated from Fairmont College (now University) in West Virginia.  She was immediately hired by the Times West Virginian and on her first day on the job, while writing the piece for a major story she’d had to cover, she realized she was doing exactly what God intended for her to do with her life.  In 2009, at the age of 31, she became the Managing Editor of her paper — a feat unheard of for not only her age, but for a woman her age.  She married the sports reporter from her paper and had a very cool New York Yankee’s themed wedding (with the rolled up programs being handed to guests out of newspaper bags).  She has three children — a son who is very very good at soccer, a daughter who dances competitively, and a son who is age-wise in between Scott and Johnathan, who loves Star Wars and superheroes with a passion that rivals only my sons.  Since she lives in the same town as my parents, I get to see her a whole lot more often than my brothers, and I love that.

That is my family.  We are a close family, and I think that’s fantastic considering how the world is kind of crumbling around us.  We don’t all get to be together in the same continent very often, but when we do it’s wonderful.  I miss my family and as much as I love the military life we lived, the downside is the lack of same-town roots — or at least same-state roots — as adults. 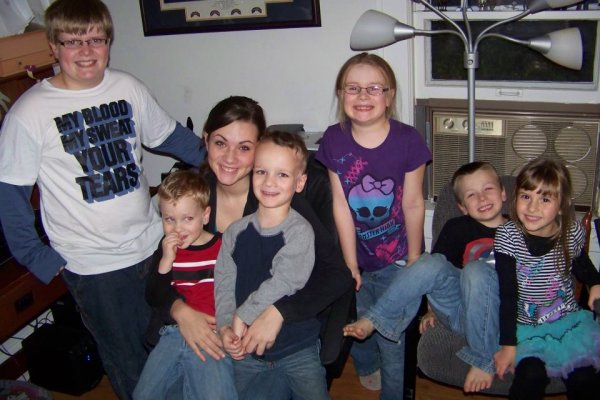