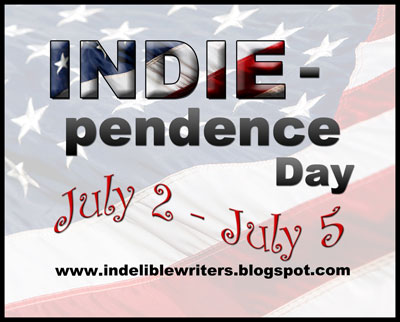 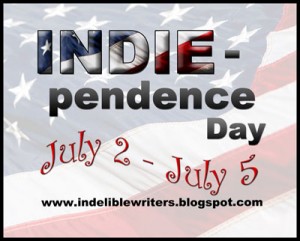 I am thrilled to be part of  the INDIEpendence Day Blog Fest! This is where we are paying-it-forward by recognizing an independent (meaning self- or small-press published) author we love.

I have introduced you to Amy Durham before. She was the first author I ever interviewed for Readers Write to Know Wednesdays. I really enjoyed interviewing her. Since this is a celebration of independently published writers, I am highlighting part of the interview where Amy talks about choosing to self publish:

I tried for some time to find a literary agent and go the traditional publishing route. More than the potential financial advance or the mass market of my book, what I was really seeking was the approval… the affirmation that my writing was good. What I got instead was a lot of “positive rejections”, if there is such a thing. I got comments like “I love your writing, but we don’t have room in our line up right now” and “This premise is so fresh. You are SO close.” And what I wound up feeling was that I was stuck. I found it difficult to keep writing when I was seeing no movement on the book that was already done! I was inspired by several Indie authors that I know personally, and once I began considering Indie publishing, the more I realized that I didn’t need an agent or a publisher to affirm my work. I needed to believe in myself, and the affirmation would come from readers. Once the decision to “go Indie” was made, it was as if a weight was lifted from me, and I felt more free and more creative than I had in over a year. I KNEW it was the right decision, because I was no longer stuck in that vacuum of non-momentum. I was moving FORWARD! 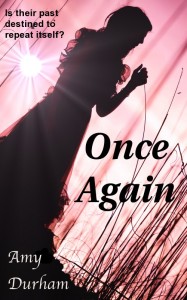 Once Again is the story of sixteen year-old Layla Bradford. Layla and her family are new residents in Sky Cove, Maine, a small-town she thought was ordinary, but turns out to be an episode of “Cold Case” on steroids. Layla doesn’t want to fit in; she wants to blend in and stay out of the spotlight. But the spotlight is where she winds up when she catches the eye of school cross-country star and all-around-nice-guy Lucas Ellis. She quickly learns there’s more at stake than high school reputations when she and Lucas discover they are the reincarnations of a young married couple from the mid-1800s who suffered a horrible tragedy at the hands of a madman who was never brought to justice. After a series of frightening visions show Layla and Lucas glimpses of their past-lives, they realize that the villain of their previous existence has also been reincarnated, in the form of a fellow high school student who targets them with teenage pranks that soon turn dangerous. As they grow closer, will Layla and Lucas be able to uncover the truth in time to stop the same tragedy from unfolding once again?

I really loved these characters.

Layla is not your typical angst-driven teen. She has a logical mind and a level head. She respects her parents and rather than being upset at being moved from Nashville, Tennessee, all the way to Maine, she is excited that her father is fulfilling his dream and starting a new business. She handles herself well in a new high school in a small town, and quickly makes some quality friends.

Lucas Ellis is every mother’s dream high school boyfriend for her daughter. He is polite. He loves his mother and shows her courtesy and respect. He carries Layla’s book bag for her, opens car doors for her, and treats her like a treasure. He is an honor student and a star athlete who brushes aside personal accolades to give credit to his team. He is a gem of a man.

The story moves quickly. It is an easy read with a fun plot, and at the end, I desperately wanted a 5-year-ahead glimpse to see what their future looks like. The characters were so appealing that I want to know that they end up together in a happy ever after.

I know Amy is writing the sequel to this book, and I am really looking forward to getting to know some secondary characters a lot better. 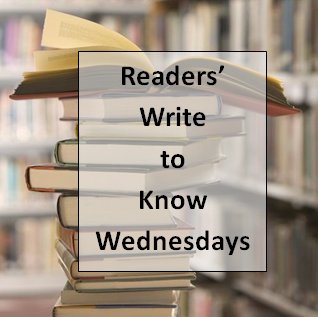 I am thrilled today to introduce to you my personal friend, Amy Durham.

And — in an exciting twist for this inaugural Readers’ Write to Know Wednesday, we are giving away an autographed copy of Amy’s book!  Read below to find out how you can enter to win!

Out of the questions submitted by you in my survey, Amy chose 10 to answer.  I hope you enjoy reading her responses as much as I did! 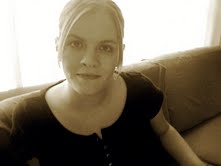 1.  Tell us a little bit about yourself.

I like to call myself a thirty-something professional multi-tasker. I wear a lot of hats. Wife, Mom, Teacher, Friend, Author, and at various times I’m also Cook, Laundry Lady, Church Nursery Worker, Homework Helper, etc. etc. My life is busy and completely UNdull. My husband of nearly 16 years and I are raising 3 boys, ages 13 ½ (and yeah, the half is important to him!), 9, and 6. I’m a middle school and high school vocal music teacher. And I’m a young adult fiction author. Throughout all of that is the thread of creativity, without which I would surely shrivel up and die. Parenting and family life is most definitely creative… I mean, you can only say “because I told you so” so many times before you’ve got to create another reason “why”. And teaching is the same way. You can teach the same stuff, the exact same way all the time and get completely bored, or you can switch it up and create new and different ways of approaching the same subject. And cooking… that’s one of my favorites. Nothing like creating something fantastic that my family enjoys. I love the immediate gratification cooking provides. And of course, writing. Where would I be without it? It’s the one creative outlet that’s all mine, and it gives me something none of the others do!

Tell us about your book.

“Once Again” is a Young Adult Paranormal Romance. I love writing paranormal stories, because I find that when I read, paranormals allow me to reallllllly suspend disbelief and escape into the book. The main characters are Layla Bradford and Lucas Ellis, both high school students. As they get to know one another and grow closer, they discover (through dreams and visions) that they are the reincarnation of a young married couple from the mid-1800s, who suffered a horrible tragedy. The madman responsible for the tragedy was never brought to justice and no one ever knew the truth of what happened. Layla and Lucas must uncover the truth of their past life in order to keep the same tragedy from happening once again.