Welcome to Readers Write to Know!  I asked you, my readers, what questions they would ask their favorite authors if given the chance.  This week, I am so honored to introduce to you Justina Prima.  Justina is an Army brat (like me!), a Marine mom, and a grandma of three, who has written an absolutely fascinating book called The Pawnbroker’s Ring. I have totally fallen in love with the premise of the book. In the interview, you’ll see Justina mention her sister, to whom she dedicated the book.  Justina’s sister, Anna, was her greatest support.  I hope you enjoy reading this interview as much as I enjoyed giving it.

Let’s see, where would I start?  Three siblings and I’m the third, one brother being the oldest.  Pretty well traveled and that’s primarily because my father was in the military and then I joined when I was 18.  I have two wonderful children, a son and a daughter, and she gave me three grandchildren. These two offspring give me good reason to be proud of them. My son was in the Marines and over in Iraq, and my daughter is a fantastic high school teacher and was one of the ten nominated for Best Teacher of the Year in Illinois two years ago. Now they have lives of their own and my husband and I live in Denver. I wish I had more time to write, but the free moments I squeeze in have to be filled with helping to care for my brother who has Alzheimer’s and working weekends as an Admissions Hospice RN. I do still have moments to write and am working on my second. 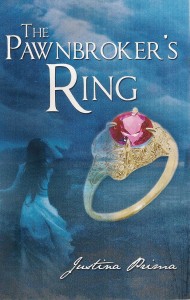 Though I have written two other books, The Pawnbroker’s Ring was the first to be accepted and is receiving excellent reviews. Zachariah lives for God and the opportunities to serve Him by secretly helping others. Zachariah prays most earnestly for the people of Salem. He acts differently, looks differently, and he’s found the ring.  Loving God above all, the money he receives from pawning it will support anonymous aid to others.  He is also in the employment of Adela Seward and more than aware of the upper-class prejudice for this successful single mother.  Mrs. Blackburn, who believes it’s her duty to purge those not deserving of high society, has made Adela her cause and will oust her at all cost. Discouraged and angry, Adela falls into the dregs of those who scorn her.  Further, she shuns the attentions of the pawn-broker, Eldon Canfield, who could provide respectability with marriage.  As he watches the ring touch many lives, Zachariah has been keeping a secret: someone has stolen the ring…and he knows who it is.

With all those characters in your head screaming to get out how do you write fast enough to get it all down?

I take notes. And not ones on stickies, because they get lost. If I have a thought or an idea, I scribble the basic idea or conversation on a long sheet of notepaper and keep that paper with me. Pretty soon I see that each new idea could easily fall into a planned or already written chapter. Now that I use Scrivener (how did I ever write without it?!) I transfer it as soon as possible.

What’s the first major news headline that you can remember and what do you remember? (ie. Moon Walk, Watergate, Pope being shot)

Definitely the day Kennedy was assassinated. I was in eighth grade and overwhelmed with the sudden knowledge that there are terrible things that happen in this world. My father had always told me that you can only deal with things you can change, concentrate on things you can change. Perhaps writing Christian Fiction, take one or two human failings, and then guide the character to a positive change with God’s help. This could be a way to help just one reader overcome that failing and draw closer to Him. 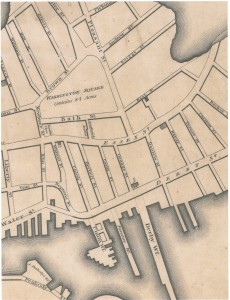 Do you have your plotline and character development already laid out before you begin writing a book–yes, or do they develop as you write?

Yes, I do and surprisingly, the character changes my mind. I could be typing away and then all of a sudden sit back and say, “Why did I just type that?” Then I think it through and find that the character wanted it that way!

Never give up. Force yourself to write, even when you don’t feel like it, even if it’s just a line. You’ll find yourself writing more than just one!

It was Carolyn Keene who is responsible for planting the seed of writing. Nancy Drew was my number one best way to spend an afternoon, even on a perfect Saturday, curling up on the couch with a glass of cherry Kool-Aid, my brother playing classical music, and turning the pages of a new mystery for Nancy and me to solve. I’d end the day, and the book, licking my red-stained lips and treasure the hours of Nancy and Mozart.

What do you do when you hit a roadblock and have NO idea what to write? What is your personal, most effective way to get past writer’s block?

I turn on music and clean house, not really thinking about the book at all. Suddenly something pops up. If it doesn’t after the house is clean, it does between 2 and 3 in the morning !

It happened with The Pawnbroker’s Ring. I can’t reveal it completely here and give it away, but there is one very big occurrence in the book that changed totally. I had it planned one way and it just wouldn’t come onto the paper. It absolutely refused to go there. My sister and I spoke at great length about it.  She believed I should keep it as originally planned and ‘why in the world would you want to do that?’ when I told her how it was trying to force its way into the story. After a week of discussion, she did agree with the reasoning. I only wish she could have lived to see it published and read the discussions about the section in question. Perhaps she already knows…